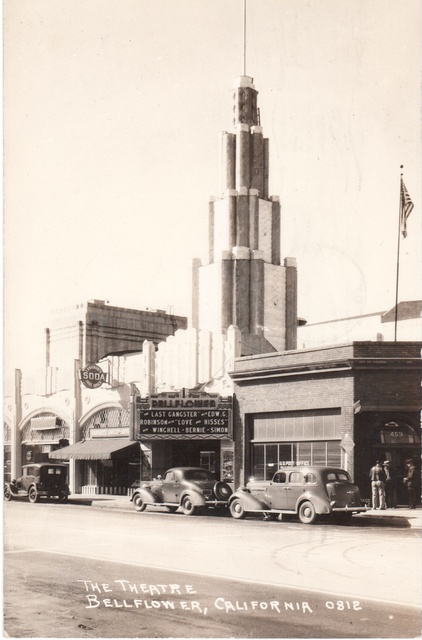 The New Bellflower Theatre opened on March 29, 1930 it was built for and operated by Frank E. Woodruff. Seating was provided for 900, all on a single floor. Later becoming the Bellflower Theatre. In October 1949 it was remodeled and a balcony was installed, increasing the seating capacity to 1,150 and it was renamed Nubel Theatre. It was renamed Holiday Theatre on July 21, 1966.

Ken: Did you also get photos of the Circle Theatre while you were in Bellflower?

No, I got off the freeway on the spur of the moment. I saw the Circle listing when I was posting the photos. Maybe another time.

A boxoffice item of May 8, 1948, reveals the time when the Bellflower Theatre became the Nubel (yes, only one “l” on the end— see the vintage photos linked in comments above) and got its modern look. It says in part: “South-Lyn Theatres… has earmarked $150,000 for extensive modernization and enlarging of its Bellflower Theatre, which will be renamed the Nubel.” The item said that the seating capacity was to be increased by the addition of a balcony, the width of the entrance was to be doubled, and a new marquee and 60-foot sign tower would be installed.

Boxoffice of October 22, 1949, announced the recent reopening of the remodeled house. The expanded seating capacity was 1,150, according to this item. South-Lyn Theatres was run by Al Hanson, and operated two houses in South Gate, two in Lynwood, as well as a second theater in Bellflower.

It was around 1973 and I was going to school down the street at St. John Bosco. I was about 16 years old driving down Bellflower and notice that the Holiday had re-opened. The new owner was there and let me in. I told him that I run the projectors at school (DeVry’s 35mm)and could I see the booth. Well he then explained to me that the power had not yet been turned on. He could tell I was disappointed and grabbed a flashlight and took me up there. Couldn’t see much but the pictures I have seen look right on. It was a great day for me.

Is there any explanation for the letter “A” in terrazzo?

I watch many a matinee there ase a boy. Ate at Hungry Tummy around the corner too.

Just one more loss in my life. Nothing to show my son.

This reopened as the Holiday theatre by Statewide Theatres on July 21st, 1966 with stars in person, bands and a parade. Grand opening ad posted.

The Nubel Theatre and the theatre operations of Al Hanson and son Wayne Hanson are documented in the U.S. Senate hearings of 1953. Libraries that have government documents might have the book, which is the record of the Select Committee on Small Business, 83rd Congress. Many exhibitors testified at these hearings about motion picture distribution trade practices. Wayne Hanson testified that the remodeling in 1948 cost $180,000 and 92 seats were added. The Hansons had recently acquired the theatre then. He said the grosses started dropping after the remodeling. It was a later run house and most of the exhibitors testifying at these hearings operated late run theatres or small town theatres, and were complaining that the US Justice Dept was not enforcing the decrees. They said distributors had found ways to get around the decrees by making product scarce, selling nearly all film on percentage, and favoring large circuits. They also complained about bidding, which many of them said was only a ruse to get higher rental fees. Hanson said that for late runs he still had to pay rental fees that compared to theatres in the area that had much earlier runs. There were also complaints about distributors grouping theatres into zones that were not competitive with each other, yet doing this to force artificial bidding wars.

The remodeling caused the theatre to be closed between June 5, 1949 and Oct. 13, 1949. When it was reopened, the grosses dropped. The Hansons provided this correspondence to the U.S. Senate subcommittee on small business in 1953: “Before renovation the Nubel Theater was doing an average gross of $3,200 per week. We then spent $180,000 on remodeling and added 92 seats, and then opened to a gross of $2,800 per week. Since that time the average gross has steadily decreased until at the end of the first quarter of 1953 our average gross was $2,043 per week. Certainly an extra 92 seats does not justify an increase in film rental in view of a 36-percent decrease in the average weekly gross.”

The “New” was later dropped and Funk’s son, Jack, would run the Bellflower. As the close of a 20-year leasing agreement approached, the theatre would be redesigned as the Nubel Theatre getting a balcony with expanded seating at its relaunch in 1949.