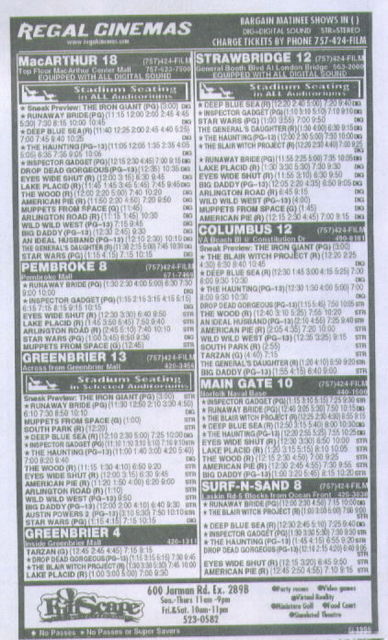 Opened by R/C Theatres in September 1991 as the Surf-n-Sand Movies 8, the theater closed in 2001 when it was under Regal Cinemas management. It later reopened under R/C management which closed it in 2008 when its parent company failed to pay rent. The theater reopened in May 2011 as the Beach Movie Bistro with seven screens and food and beverage service. By early-2019 it had reopened as Beach Movie Alehouse. It was closed on March 18, 2020 due to the Covid-19 pandemic. It was announced on January 18, 2021 that the closure would be permanent.

It was reopened as the Beach Cinema Alehouse in May 2022.

What about the Columbus Circle and Pembroke Mall?

Here is an article about the theater’s reopening: View link.

I also left out the Strawbridge 12.

Just 1 ½ miles from the beach.

This theatre’s completion was announced in the September 1991 edition of Boxoffice. RC Theatres was the operator.

It is open. Now known at the Beach Cinema Alehouse, it’s a dinner and a movie theatre. http://www.beachcinemaalehouse.com/

The Beach Cinema Alehouse closed March 18, 2020 due to the COVID-19 pandemic. On January 18, 2021, the operators made the closure permanent.