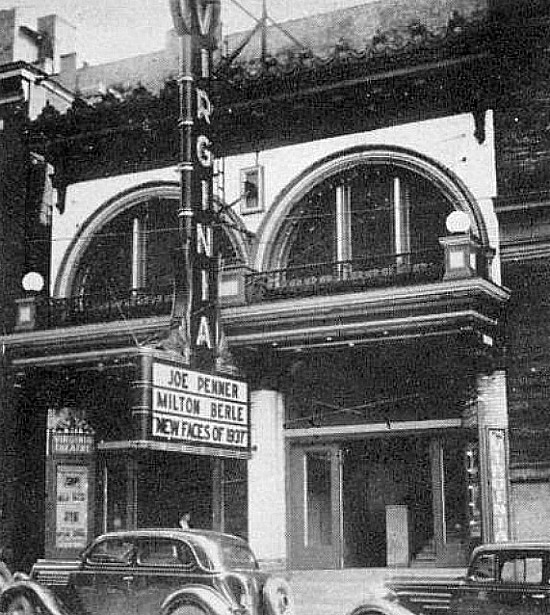 The Virginia Theatre was opened in 1908, and closed in 1962. It was operated by the Dipson Theatres chain.

I believe 80 12th Street is the Board of Trade building, which was home to the Court Theatre. Perhaps this was an alternate name?

This history of radio station WWVA mentions the Virginia Theatre a few times. From 1934-1936, and from 1946-1962, the broadcasts of its live music show “WWVA Jamboree” originated from the Virginia. The following excerpt, dealing with events of 1962, indicates the age of the theater and its fate:[quote]“Meanwhile, in the Virginia Theatre, the Jamboree continued to enjoy a surging popularity with both radio listeners and visiting fans. All the while, however, an unseen ‘player’ was lurking in the wings, a questionable character known as ‘PROGRESS’, and its appearance spelled doom for the historic 54 year old theatre that had been home for the Jamboree since 1946. The Virginia was doomed for demolition and the Jamboree would be forced to seek a new location.

Here’s a picture of the Virginia Theatre in 1937.

At the bottom of this web page is a small photo of the Virginia Theatre, probably from the late 1940s or early 1950s. It’s a night shot, but you can make out part of the Board of Trade Building next door.

Here is an early postcard view of the Virginia Theatre with the upper portion of the Board of Trade Building brushed out. That was a common practice by postcard publishers, which makes postcards less than perfectly reliable as sources of historic information.

This page from the Wheeling Jamboree web site features photos of the various venues that hosted the show over the years. There is a view of the Virginia’s auditorium seen from the stage. The gallery (aka second balcony) was positively vertiginous.

Linkrot repair: The 1937 photo of the Virginia Theatre is now here.