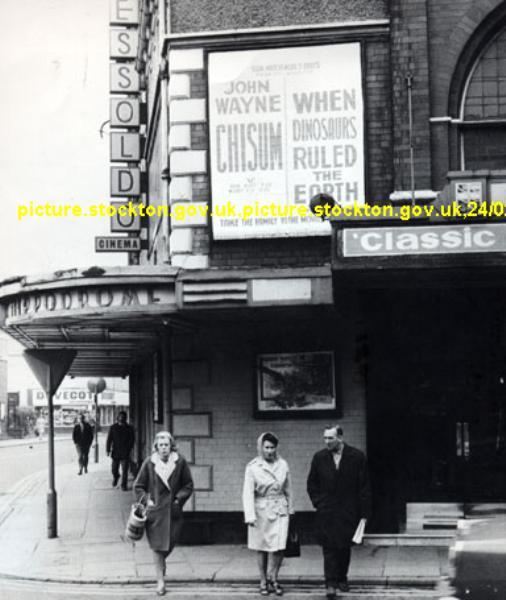 The Hippodrome Theatre was opened on 18th December 1905 as a live theatre, with films screened as part of the variety programme. Seating was provided for 1,700 in stalls, circle and balcony levels. The proscenium was 40 feet wide and the stage 30 feet deep. There were ten dressing rooms. It continued as a variety theatre until the early-1930’s, when it was equipped with Western Electric sound for the screening of ‘talkies’. The theatre was gutted by a fire on 8th November 1932, and it was rebuilt to the plans of architectural firm Chadwick, Watson & Company, re-opening on 28th August 1933.

After over a decade as a successful cinema, the Hippodrome Theatre reverted back to live shows in 1948, although there was still some film use. Stars who appeared at this time include Morecambe & Wise, Harry Secombe and Frankie Vaughan, with repertory theatre staged by Harry Hanson & his Court Players. It was taken over by the Essoldo Cinemas chain in 1955, and went back to full time cinema use, eventually re-named Essoldo on 23rd June 1968.

It was demolished in January 1996, and the ARC Stockton Arts Centre (which includes a cinema) was built on the site.

Three photos of the former Cannon at various times here:–

The theatre with 3 names!

When, in 1968, Essoldo Ltd decided to rename the Hippodrome, Dovecote Street the ‘Essoldo’ (The Cinema, High Street which bore the Company name had been on bingo for four years by this time), they never got around to removing ‘Hippodrome’ from the corner canopy. To compound matters further, when Classic acquired this and the rest of the Essoldo circuit in 1972, it took them several months to change the main signage. They did, however, plaster the word ‘Classic’ everywhere else possible and there were then 3 names to choose from when visiting the Dovecote Street theatre.

When some old hack in the local press suggested that it be known as the ‘Hippessoldic’, Classic suddenly found the money to change the fin sign and remove ‘Hippodrome’ from the canopy.

Essoldo were rather prone to leaving former names on their cinemas, other examples in the North East being Bishop Auckland (Hippodrome) and Gateshead (Empire).

How things were 60 years ago. 1959 panto bill uploaded. Happy Christmas everyone.