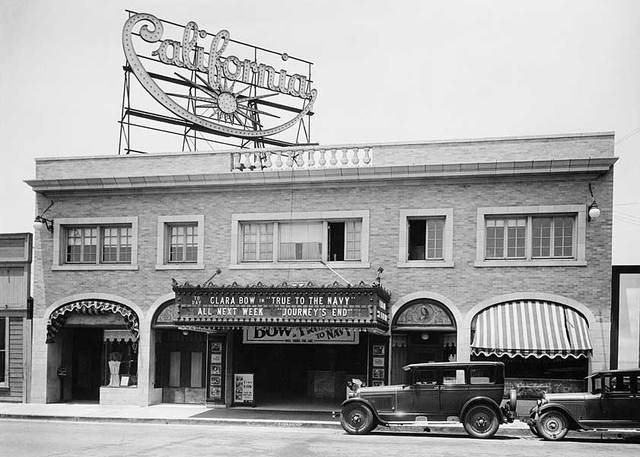 The California Theatre was closed in 1962.

A series of parking lots / garages currently occupies this address.

As it was open by very early 1920 (mentioned in the January 18 issue of The Los Angeles Times,) the California Theatre might be the project noted in the April 16, 1919, issue of Building & Engineering News:

“SANTA BARBARA. Cal. West Canon Perdido St. Two-story reinforced concrete and brick theatre and store building, 65x150 (excavation started.) Owner — E. A. Johnson. Architect— J. Corbley Pool, 10 Bothin Bldg., Santa Barbara. A large pipe organ will be installed.”The May 3 edition of The Moving Picture World also mentioned the project, saying that it would be exclusively a picture house, with all seats on one saucer-shaped floor that would feature a tunnel exit (which sounds as though it might have had a stadium-style section.) The pipe organ for the house was budgeted at $30,000.

A biographical sketch of architect J. Corbley Pool published in 1917 said that he was also noted as an acoustical engineer. He served as a consultant in the design many churches and auditoriums across the United States. Perhaps that $30,000 organ had something to do with the choice of Mr. Pool as architect for this theater.