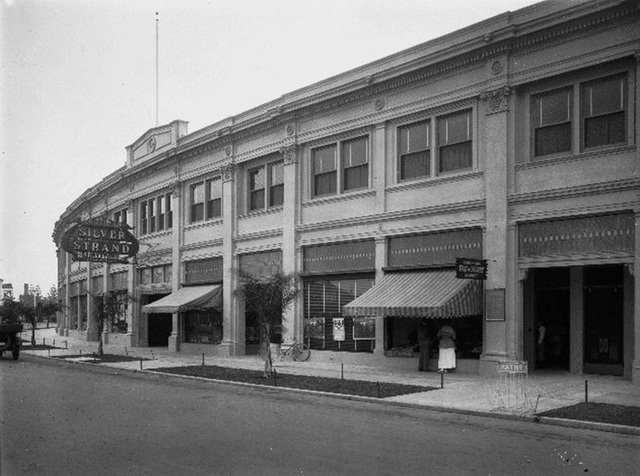 The 600-seat Silver Strand Theatre was built by John Spreckles and opened as a movie theatre in 1917. It also hosted some live theatre presentations. In 1935 it was renamed Coronado Theatre. It was closed in the 1970’s. The building then served as a town hall/meeting hall for several years.

Today operated by the Lamb’s Players company of San Diego, the foyer space has been somewhat restored, but the auditorium has been gutted, and is now a black box theatre.

If one scrolls down to near the bottom of this page, there are links to three pictures of this theater as the Silver Strand: View link.

The Silver Strand Theatre and its adjacent commercial, office, and residential buildings were another project built by John D. Spreckels, who had earlier built the Spreckels Theatre in downtown San Diego. The Silver Strand was not built as a playhouse, but was specifically designed for presenting motion pictures and live music.

The October, 1917, issue of The Santa Fe Magazine, published by the Santa Fe Railway as a rival of the Southern Pacific Railroad’s Sunset Magazine, had an article about Coronado which mentioned the Silver Strand Theatre several times, and describes it in this passage:

The Silver Strand Theater, erected at a cost of approximately $100,000, is a gem that would do credit to a city many times the size of Coronado. It’s equipment, including a $10,000 pipe organ, is magnificent. The indirect lighting system, by means of rich art glass ceiling panels, attracts universal comment. Although it is a motion picture theater, it is so elegant and the pictures shown are of such a high class, that it is quite a social fad to give loge parties there. During the coming winter many special musical programs, featuring stars of the first magnitude, will be arranged for the delectation of the cultured classes.“

Live music was one of the Silver Strand’s attractions from the beginning. At the formal opening on July 20, 1917, renowned contralto Ernestine Schumann-Heink sang several songs as part of a program benefiting the Red Cross. Another passage from the article praises the house thusly:

"In the Silver Strand, Coronado has undoubtedly one of the most beautiful moving picture Theaters in the whole of the United States, for Mr. Spreckels, owner of the building, has spared no expense in carrying the beautiful to the superlative degree, nor in erecting a theater which for convenience and acoustic properties cannot be surpassed. Only the finest quality of pictures will be shown and everyone in San Diego is sure of a satisfactory evening’s entertainment when he crosses the bay to Coronado.”

John Spreckels chose as architect for his Coronado project Harrison Albright, who, after a distinguished career in Philadelphia, West Virginia, and Indiana, had moved his practice to California in 1905, designing the Homer Laughlin Building (Grand Central Market) in Los Angeles, in which he established his offices. Here is an item about the letting of the contract for the Coronado project, from the June 17, 1916, issue of Southwest Contractor & Manufacturer

“CONCRETE BANK, STORES, THEATER —The Wurster Construction Co., 654 Spreckels Bldg., San Diego, has the contract to build a 2-story reinforced concrete bank and office building, 2-story store and apartment building, moving picture theater and garage at Coronado for the J. D. and A. B. Spreckels Securities Co. The site is now being cleared. Harrison Albright, architect, 532 Laughlin Bldg. The structure will have a frontage of 372 ft. on Orange Ave. and 211 ft. on Lorna Ave. The bank and office building will be 60x86 ft., garage 65x100 ft., and theater 52x130 ft., and will seat with gallery about 1000. The store building will contain 14 rooms averaging 20x50 ft. and 14 apartments of three rooms and bath each with built-in beds. The construction will be reinforced concrete with cast cement ornamentation and cement plastered exterior, composition roof, plate glass windows, mahogany and birch trim, marble and tile lobby in bank and theater, metal frames and sash and wired glass, metal skylights. There will be a steam heating and ventilating plant, auxiliary fire pump, automatic fire sprinkling system with two steel tanks of 16,000 gal. capacity, reinforced concrete bank vaults, vacuum cleaning, electric wiring.”

It is unfortunate that Harrison Albright’s original interior for the Silver Strand Theatre has been lost, but at least the building itself has survived. Still, I have to wonder if any of the auditorium’s original features were intact when the dark house was taken over by the Lamb’s Players in 1994. It wouldn’t be the first time a theater company had opted for an economical “black box” configuration rather than bankroll a costly restoration of vintage features.

Was there an “Art Gallery Theatre” in Coronado, California?

According to pg. 628 of “The Encyclopedia of the American Theatre Organ” by David Junchen, the “Art Gallery Th.” in Coronado, California, had a Smith theatre pipe organ installed at some point. No further details are given, such as size (# of manuals, # of ranks), year of installation, blower info, or nameplate (Smith, Leathurby-Smith, etc.).

I notice the mention of a “$10,000 pipe organ” in the mention of the Silver Strand Theatre in the above-cited article in the October, 1917, issue of “The Santa Fe Magazine”.

Could this have been a Smith organ?

Are there any mentions of the make of the Silver Strand’s organ in any articles?

It’s too bad what must have been a gorgeous art-glass interior of the Silver Strand was apparently gutted (and there’s no surviving photos of this???), but at least the building is still there!