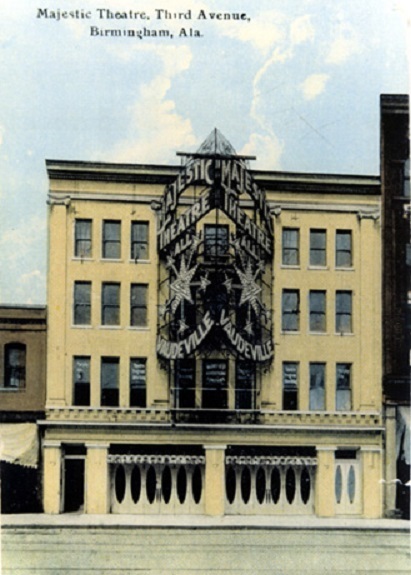 The Majestic Theatre was being used as the Jefferson furniture store in the 1920’s. In 2009, it was occupied by Superior Furniture.

An exterior photo of the Majestic Theatre appears in the book ‘Birmingham’s Theater and Retail District’ by Tim Hollis.

There is an old postcard view of the Majestic on this webpage; scroll down about one-third of the way).

This item about the Majestic is from the March 4, 1916 issue of The Moving Picture World:

“Louis Pizitz, a merchant of Birmingham, Ala., has purchased the Majestic in that city from General Louis V. Clark, the consideration being $160,000. The Majestic was built ten years ago, is four stories in height, with an office building front and a seating capacity of 1,000. General Clark acquired this theater on April 4, 1914, paying for it $125,000. The Interstate Amusement Co., of which Carl Hoblitzell is the head, is the present lessee of the Majestic. Mr. Pizitz has not fully decided as to what use he will put the theater, but it is rumored that in all probability it will be converted into a motion picture house, in line with similar changes being made all over the country.”

The Majestic was back in the journal’s July 15 issue:

“H. F. Niel, manager of the Majestic theater, Birmingham, Ala., one of the largest photoplay houses in the South, was in New York City recently on business. Mr. Neil will be in charge of the Southeastern Film Exchange, which has headquarters in Birmingham.”

.A 1971 Birmingham News article (cited on this web page) said:

Bhamwiki says the building was built in 1902 as the Jesse French Piano & Organ Company showroom, and was converted into a theater around 1905. John Eberson’s remodeling of the theater took place in 1908-1909, as noted in the December 25, 1908 issue of The Billboard. The project was budgeted at $15,000.