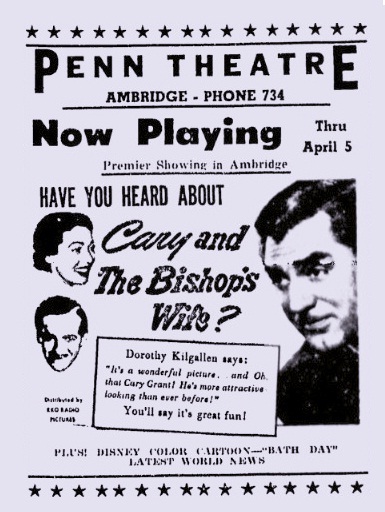 The Penn Theatre was operating prior to 1941, and was operated by Paramount Pictures Inc. through their subsidiary A.N. Notopoulos. It continued until at least 1950. More information would be welcome.

Given its location, the Penn Theatre might have been the project that was the subject of this item in the April 10, 1915, issue of The Moving Picture World:

“Col. T. J. Keenan, the Pittsburgh newspaper man and capitalist, has announced that he will have work started in a few days on a fine large theater block covering his lots on the southeast corner of Merchant and Fifth streets, Ambridge, Pa. While the details of the construction of the building cannot be given at this time, it is known that the building will cover the whole of Col. Keenan’s lot-holding at this point, which consists of four lots, an area of 88x1OO feet.

“The new theater will be one of the finest between Pittsburgh and Cleveland. It will have seating capacity for more than 8OO persons and in modern construction and architectural design it will be the last word. Besides the commodious theater a couple of splendid business rooms, suitable for mercantile purposes, will be included in the new block. When built the theater will be placed in charge of an experienced and efficient manager.”