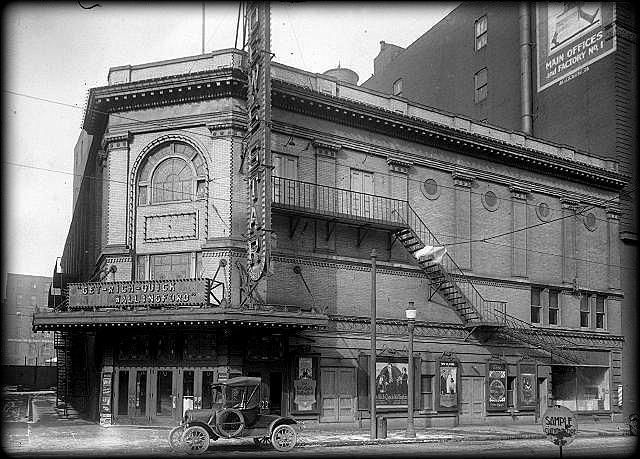 Gordon’s Theatre opened on 17th February 1913 and was said to be one of the most modern and pretentious motion picture theaters in the country. It was built of brick and seated 1,827 people, about equally divided between the first floor and the balcony. It was modeled after the New York Hippodrome, being very wide and having six aisles.

An unusual feature for the period was a moving stairway running from the first floor to the balcony. This escalator was located in the rear of the house close to the main entrance, so that holders of balcony tickets had but to take a few steps and then be whisked to the upper floor. There were side stairways at either side and 21 exits.

The interior decorations were in old rose and gold, with here and there a touch of blue. The seats were air cushioned, with leather coverings, and there was a large ladies room with plenty of rockers and twelve large mirrors.

A pipe organ was installed at a cost of $25,000 and Richard Henry Warren, of the Church of the Ascension, New York was persuaded to come to Rochester at a high figure to play it. In addition to the organ, which was equipped with chimes ranged around the front of the balcony, there was an orchestra of eight pieces.

The Gordon’s Theatre was built at a cost of $250,000 and was owned by The Gordon Brothers Amusement Company, of which N.H. Gordon, of Boston, was the moving spirit. Thomas S. Powers, formerly owner of four New England houses, was the resident manager.

Pictures were changed twice a week on Mondays and Thursdays and prices were five cents for women and children in the afternoon and ten cents for men. In the evening all downstairs seats were fifteen cents and ten cents for the balcony.

It was taken over by Loew’s Inc. and renamed Loew’s Star Theatre on September 12, 1920 and they operated the theater until 1926. It was demolished around 1928 and the RKO Palace Theatre was built on the site.

Boy I’d like to see pictures of this. Escalators in 1913. Wonder what this all would have cost in today’s dollars. Great background info, but how long did it last? Certainly must be more out there.

If the information on this website is correct about this theater, Loew’s operated this theater from 1920 to 1926. Schine’s Rochester opened in 1927, so what Tinseltoes speculates essentially makes sense, depending on when Loew’s took over the Rochester from Schine; Loew’s was operating the Rochester at least as of 1930.

The information also indicates that the 1928 RKO Palace was built approximately on the site occupied by Gordon’s/Loew’s Star. Perhaps someone made Loew’s an offer they could not refuse on the Gordon’s property (or perhaps Loew’s only leased Gordon’s), so there may have been a short or long gap in time before the Loew’s name appeared on a theater in Rochester.

Not surprisingly, Rochester’s own Leon H. Lempert, Jr. designed Gordon’s Photoplay Theatre. Here is an item from the June 26, 1912, issue of The American Architect:

“ROCHESTER—Gordon Brothers are planning to go ahead immediately with the construction of the new theatre in Clinton Ave. North, just north of the Masonic Temple. The theatre is to cost about $90,000 and is to be for vaudeville and moving pictures. Leon Lempert, 31 Pearl St., is the architect.”

The March 26, 1913, issue of The New York Dramatic Mirror ran this description of Gordon’s Photoplay:

“The Gordon photoplay house of Rochester. N. Y.,… is a fair example of the magnificent structures being erected in the larger cities throughout the country for the display of motion pictures. It was built by the Gordon Brothers Amusement Co., of which N. H. Gordon, of Boston, is managing director. The total cost of construction and equipment totalled $250,000. The house seats 1,827 people, 911 on the main floor and 916 in the balcony.

“A novel feature of the theater is a moving stairway used to convey patrons to the balcony floor. It is eighty-nine feet long, being eleven feet longer than any other of its kind used in a theater. With twentyseven five-foot exits opening directly out of doors, fifteen on the ground floor and twelve in the balcony, it is estimated that the entire audience can leave the building in a trifle more than three minutes.

“The screen, concave in shape and measuring nineteen feet five inches by fourteen feet five inches, is said to be the only one of its kind in use in New York State. Even from the most remote seats the pictures are clearly in view. On either side of the screen are stages set with columns, draperies, ferns, etc., and adjoining these are two art panels, one representing mirth and the other music.

“The organ installed was built by M. P. Moller. and is called a four manuel or console organ. It is the largest instrument of its type now in use. Richard Henry Warner, late of the Church of the Ascension, New York, is the organist. Other music is supplied by an orchestra of eleven pieces, under the direction of T. Quiry, of the Boston Conservatory of Music.”

Something happened to this lovely theater in early 1922. A search on “Old Fulton” of ‘photoplay" listings in the Rochester Democrat and Chronicle shows Lowe’s Star screening movies through March 1922, along with the other Downtown Rochester movie theaters of the time (Victoria, Regent, Piccadilly, Rialto and Strand, and then, starting April 1922, it simply drops off. There are a few announcements of religious events at the theater in 1923-1925 and then that’s it.

The 1926 plat map of Rochester http://photo.libraryweb.org/rochimag/rpm/rpm00077.htm shows the Michael Stern building at the southwest corner of North Clinton and Pleasant Street, the old Masonic Temple at the northwest corner of North Clinton and Mortimer Street, and the Star Theater located between them. Looking at the picture of The Star, you can see the Michael Stern building to its right (that building still stands, as loft apartments).

The 1935 plat map of Rochester http://photo.libraryweb.org/rochimag/rpm/rpm00465.htm shows an empty parking lot where the Masonic Temple was, and a building to the north that appears to be a replacement (a seven story building now stands adjacent to the Michael Stern building, at 79 North Clinton Avenue). The map marks the lot as owned by the RKO Palace. The actual Palace theater is to the west, on Mortimer Street, so the Palace was not built on the site of the Star.

The entrance to the RKO Palace and its associated three-story office and commercial building were on the site of Loew’s Star. The Star must have been demolished by early 1928. It’s remarkable that this large, substantial theater stood for only fifteen years or so.

In the current market fifteen or twenty is not unusual.