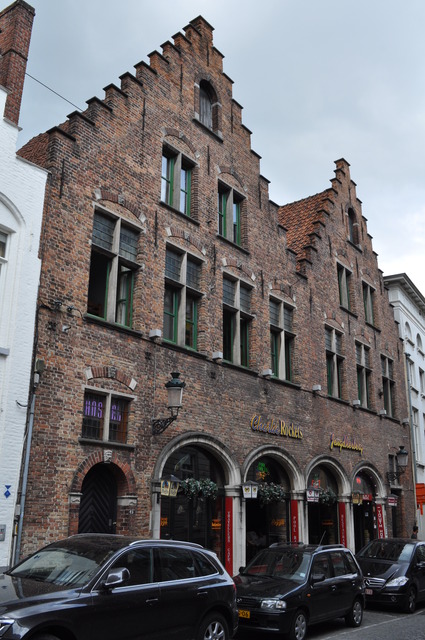 The Gothic style exterior of the building almost certainly dates from the 15th Century. Inside, there is an Art Deco style auditorium. Seating was provided in orchestra and balcony levels.

The luxurious Hollywood Cinema opened in 1928. In 1929, it was re-named Crosly Palace, and from 1945 the Palace Cinema. It was finally re-named Memling Cinema in 1953 (named after German artist Hans Memling, who lived in Bruges from around 1465). The Memling Cinema was the largest of the single screen cinemas which once operated in Bruges.

In 2011, the front of the building is in use as Charlie Rockets Youth Hostel. The former foyer now has on display one of the former cinema’s projectors and serves as a bar and lobby to the youth hostel. The rear orchestra seating area is now a games room with five pool tables for the use of hostel guests. A wall has now been dropped down at the balcony edge, beyond which is the former auditorium, now in use for storage. The screen is still in place, as are the screen curtains, which are partially opened.

I was told the building is heritage listed, but as much as the hostel would like to put the auditorium to some public use, they are apparently prevented from doing so.