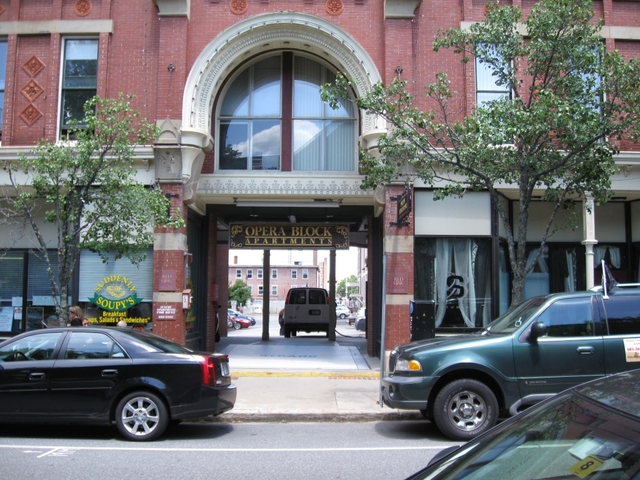 Opened as the Manchester Opera House on January 24, 1881. It was renamed Strand Theatre in 1906. Seating was listed at 1,265. By 1935 the Strand Theatre was operated by Shea Theatres. The theatre closed in the mid-1970’s. The auditorium has been demolished, and the front of the building converted into apartments.

The Strand in Manchester is listed in the 1942-43 Motion Picture Almanac as part of the Shea Circuit, run by Shea-Chain Inc & Affiliates of 1540 Broadway, New York City. Other Manchester movie theaters run by Shea at that time were: State, Palace, Crown, Vitaphone.

The Strand Theatre opened on January 24, 1881, as the Manchester Opera House. A history of the building can be seen on this web page. The building was designed by architect John T. Fanning in the Queen Anne style (unlike many Victorian architects who would call just about any old pile of ornament Queen Anne, Fanning gave the Opera Block a fairly credible reinterpretation of the original English Renaissance-Baroque style.) The theater was renamed the Strand as early as 1906.

Several sources indicate that the Strand operated as a regular movie theater until the early 1970s, then operated as an adult movie house for several years. The building suffered two fires in 1985, the second of which, on March 10, resulted in the demolition of the auditorium. The surviving portion of the building was renovated not long after the fire and now houses luxury apartments, office space, and trendy retail establishments.

The entrance to the theater was through an arcade leading from the arch seen at the center of this modern photo of the restored Opera Block (aka Harrington-Smith Block.) The name Strand is still set into the tile at the entrance.

Google’s camera car went through the alleys on this block of Manchester, so street view shows the back of the building. The auditorium end of the Strand Theatre’s entrance arcade can be seen from across the parking lot where the auditorium once stood.

The Theatre Historical Society archive has the MGM Theatre Report for the Strand; it’s Card # 501. Address is Hanover St. Condition is Good. The report says it’s over 15 years old and shows MGM movies. There were 762 orchestra seats and 503 balcony, total 1,265. Competing theaters were the State, Crown and Palace.

The 1897-98 edition of the Julius Cahn Official Theatrical Guide has the Manchester Opera House listed under Manchester. E.W. Harrington was Mgr; there were 1,765 seats. It was on the ground floor and had both gas and electric lighting. Ticket prices 15 cents to 50 cents. The prosceniium opening was 35 feet wide X 36 feet high, and the stage was 36 feet deep. There were 8 in the house orchestra. Hotels for show folk were the Manchester House, New City, Vening’s and Oxford. Railroad was the Boston & Maine. The 1897 population was 60,000.