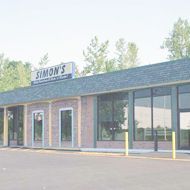 One of the first suburban theatres, it had 1,200 push-back seats and was 70MM capable. When it first opened it was “the all new air-conditioned Loew’s with acres of free parking” and was the showcase for many blockbusters through the years.

In June 1972 Loew’s built a free standing theatre behind the original which had 600+ seats and also showed 70MM movies. All the “Star Wars” movies showed in this theatre.

Loew’s later twinned the 1,200 seater. The theatres closed in 1999 after being under the SONY name and then being called Loews again.

Nice find Mike,finally got back on C.T. under my name.

Sadly, I was too young to enjoy the 70mm runs that were there (last one: Far and Away). The last film I saw there was Kids in the Hall: Brain Candy with my brother in the spring of 1996.

The original big house opened in 1965 but never ran a 70mm print until 1970 when they ran a reissue of 2001. The 600 seat house in back opened in 1972 with “the Other” This was only equipped for 35mm. In 1977 with the engagement of “Close Encounters” they moved the 70mm projectors from the big house (which had been twinned) th the small house in back.

Even up til the release of Far and Away, most still considered the 70mm-capable screen here the best in the city.

The projectors are in storage at the Eastman House, if I’m not mistaken. They’d like to eventually use them, but they need money to build a better screen (I think). It’s one of the things they continually mention with fundraisers.

Have photos of opening preview night and some older stuff from Rochester theatres. Opener for Pittsford was “The Train” on July 16 ‘65. Tony Randall and Allen & Rossi in person. It was released in March-talk about having to wait.

I remember going to this theater, I saw “ High Anxiety”, Star Trek 2. Star Wars, Return Of The Jedi, Hoffa. and a few others , ws a nice theater

The architect’s name is misspelled. The notice of this theater’s construction in Boxoffice of November 9, 1964, has a different misspelling, Yurchinson. The correct spelling, as listed in the directories of the American Institute of Architects and in the architect’s obituaries is George Edward Yurchison.