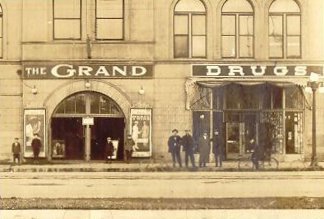 The Grand Theatre was built by the International Order of Odd Fellows in 1900. It is located in downtown Salem. At some point it became a movie theatre. Film Daily Yearbook of 1947 list this theatre with 744 seats. There is a large banquet room and ballroom above the auditorium. The theatre closed in the 1950’s. It currently is used for weddings, business meetings and other live events.

Puget Sound Theatre Organ Society has this page about the Grand Theatre, with several photos.

The web site Salem History provides this photo from 1992.

It’s final film was “Simon and Laura” on April 17, 1960. It was used for live plays, speeches, and odd events though was being considered as a performance hall in the summer of 1963 which appears to not have materialized.

This web page about the Odd Fellows Hall says that the Romanesque Revival style building was designed by architects Pugh & Gray (Walter D. Pugh and John Gray.) During its early years the theater was listed in the Cahn guides as the Grand Opera House.

The IOOF maintained its quarters in the building until 1995, long after the theater had closed. The building was placed on the NRHP in 1988. This PDF contains the NRHP nomination form, with a detailed description of the building and its history. The house showed movies as early as 1911, though live events were presented throughout the theater’s history. In the 1970s, the original stage (which had lost the upper part of its fly loft to an expansion of the third-floor IOOF lodge in 1936) was removed and replaced with a wrestling ring. The stage was reinstalled in the 1980s as part of a failed effort to convert the Grand into a venue for the Salem Theater of Performing Arts.

The original interior of the house by Walter D. Pugh was largely destroyed in an extensive 1935 remodeling by architect James W. DeYoung, which included an extension of the balcony and the addition of some Art Deco design elements to the interior. In 1928, DeYoung and his then-partner Knud Roald had served as supervising architects for the construction of the Rapp & Rapp-designed Paramount Theatre in Portland, and that commission led to several other theater commissions for DeYoung, including the Grand remodeling.

PSTOS provides this web page with a photo of the console of the Kimball organ installed at Salem’s Heilig Theatre in 1925.

Heilig’s lease on the Grand was for only one year, but the lease was Sold to J.C. Guthrie, operator of the Elsinore and Oregon Theatres, even before that year was up, as reported in the June 1, 1926, issue of the Salem Daily Capital Journal. The name Grand Theatre was restored to the house not long after the transfer.