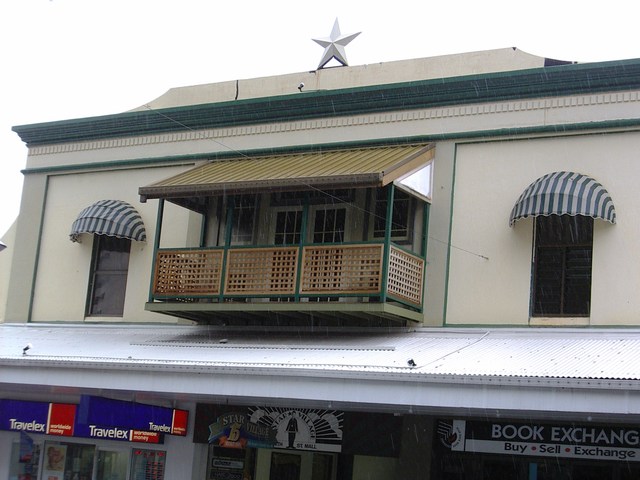 The Star Theatre and Amusement Company Ltd. (Darwin) was formed by Christina Gordon and Harold Snell in the middle of the 1920’s. Construction of the Star Theatre began in 1928, and finally opened its doors on 14th September 1929 with Laura La Plante in “The Cat and the Canary”. The Star Theatre was an open-air theatre with the rear rows and the dress circle covered by a roof. The original screen was 18ft square, while the stage and screen were mounted on wheels so that it could be moved for sporting events. The theatre at that time had 860-seats, and had escaped major damage during the bombing of Darwin.

The balcony was reserved for Darwin high society, while the working class and indigenous people, were expected to sit downstairs. It cost 2 shillings and 6 pence (2/6) to sit upstairs and only a shilling to sit downstairs.

Tom Derreck Harris regarded as a master showman was sourced from Kerang in Victoria to manage the theatre. By 1941 Harris was in a position to sub-lease the theatre from the Gordons.

The Australian film “Jedda” had its world premiere at the Star Theatre on 3rd January 1955. Harris arranged for a member of the Warhiti tribe to sing songs and burn sticks to prevent any unwanted rainfalls during the screenings. He decorated the theatre for the opening with pandanus, grass mats, and indigenous artefacts. Large crows gathered along Smith Street to catch a glimpse of the film’s stars Ngarla Kunoth and Robert Tedawali. It was reported that a number of indigenous people who were invited had paddled in from Bathurst Island to attend. Management were claiming that the world premiere of “Jedda” at the Star Theatre was greater than the introduction of talking pictures in 1933.

Business fell off at the Star Theatre during the 1960’s when two new cinemas opened in Darwin. Michael Paspalis built the open-air Parap Theatre, and the drive-in cinema at Nightcliff in 1964.

The Star Theatre was damaged during Cyclone Tracy in 1974 and never re-opened. Manager Tom Harris had died the year before after 40 years in the Northern Territory. His son, Tom Harris Junior, renovated the theatre, turning the projection room into a flat where he and his wife would live for a number of years.

The Star Theatre was renovated again and turned into a small shopping village containing a number of small shops and cafe’s. It continues to be a shopping arcade, no known as Star Village. The original projector is still on display near the entrance to the arcade.

Was the Star Theatre affected by the bombing of Darwin in 1942 and 1943 in World War 2? Did the Star Thetre have to close down during World War 2(because it was outdoors)?

Screened the World premiere of the Australian movie “Jedda”(Australia’s first movie in colour) on 3/1/1955.