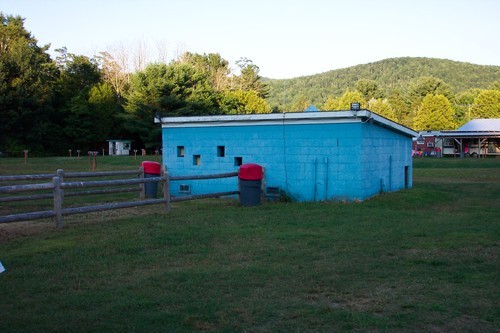 Originally opened as the Holiday Park Drive-In in 1950. In 1960 six rooms were built on the south side of the snack bar and it became the Hi-Way 5 Drive-In. In 1966 a further six rooms were built on the north side. These rooms operated as the Fairlee Motel, and the theatre was renamed Fairlee Drive-In. New owners took over in 2003. It was equipped with digital projection in 2014.

Not only is the Fairlee a drive-in, but it is also a motel. It is one of two motel/drive-in theaters in the US. The Fairlee combines the best of roadside Americana.

To watch movies, you have two choices for movie viewing: Sitting in your vehicle, the traditional way, in front of the large outdoor screen, or renting a motel room, and watching from your bed through the large picture window.

They have a fundraiser in progress to convert to digital projection.

Now there are three drive-in / motels, thanks to the addition of a motel at the Sunset in Colchester VT, but the Fairlee was the first. I don’t know of any drive-in / motel combination that ever closed; if you do, please add a comment.

It appears that the Fairlee opened as the Holiday Park, then changed to the Hi-Way 5 in the early 1960s. Maybe at the same time the motel went up?

Aha! The August 2015 issue of Southwest: The Magazine says my guesses were on target.

“(Reginald) Drowns built the Holiday Park Drive-In in 1950, and renamed it the Hi Way 5 Motel and Drive-In when he added six motel units 10 years later. It was the first of its kind in the country.”

The article goes on to say that Reginald screened every film in advance, spliced out racy scenes, and rigged the sound to go silent on cuss words. Wife Terri ran the motel and wouldn’t rent to anyone who didn’t look married or who drank beer.

Also, the Hi Way 5 must have been closed in the mid-80s. “People still talk about the reopening weekend of 1987. A couple from Connecticut named Ray and Elaine Herb took a chance on reviving the motel and drive-in, which had fallen into neglect after being shuttered for a few years.” Peter and Erika Trapp bought the Fairlee in 2003.