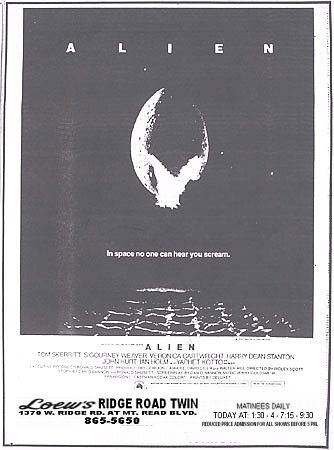 This twin opened December 24, 1975. It was Loew’s second new theatre, Pittsford being the first. Loew’s eventually had the most screens in Rochester in the 1980’s.

It tied for 1st place as the best theatre in Rochester according to the Rochester Democrat and Chronicle.

A spacious lobby, comfortable seating and good location made this theatre popular. There was a fire in 1981 which didn’t close the theatre, but left a slight smokey odour for a long time. Theatre was robbed by the Star Market bandit who robbed Star Supermarkets around Rochester. He was caught that night miles away. Should have stuck with grocery stores.

Arnold Shwarzenegger and Susan Saint James visited this theatre in 1982, while hosting the Special Olympics at SUNY Brockport, so participants could see “E.T”.

It had a red and gold color scheme and, of course, a Loew’s inner lobby art gallery.

It was closed around June 1995 with Samuel L. Jackson in “Fluke” & Clarence Williams III in “Tales from the Hood”. Part of it is now a Staples office supply store.

Unfortunately the only photo I have is in terrible condition.

Thanks dhroc for a nice intro.We gave puppies away once on “BENJI” and never could get the smell out of the letter room where they stayed at night.LOL.

I can remember seeing “An American Warewolf In London' here,