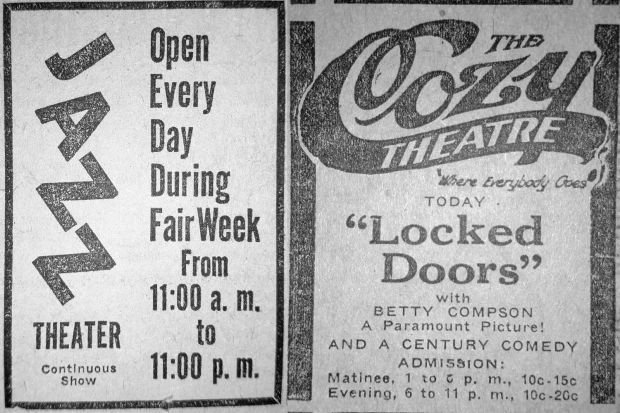 A “45 years ago–yesterdays In Billings” column in the Billings Gazette on August 12, 1966 said: “A new motion picture theatre will open in Billings September 8 (1921). It will be established at No. 14 North Twenty-Seventh Street and will be known as the Jazz Theatre.” Gazette archives show that the Jazz Theatre name remained until October 1924 when it was announced that it would be completely redecorated and renamed the Cozy Theatre. The new operation included a $13,000 pipe organ and a novel addition — a restroom for women. Manager M. Fregger said in his estimation this restroom would fill a “long-felt need.” About a thousand people entered the contest to rename the theatre and 12 people suggested “Cozy. “ A 12-year-old girl won the $25 prize after her name was drawn.

The demolition date is unknown, but today a modern building occupies the site.

This opened as the Jazz theatre on September 8th, 1921. Ad in the photo section.