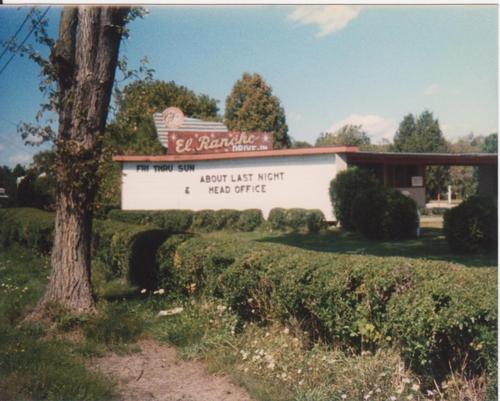 Construction on the El Rancho Drive-In was started in 1951 and the drive-in opened on June 24, 1952 with Dean Martin & Jerry Lewis in “That’s My Boy”. The car capacity is listed at 350 cars. The screen measures 60'x 90'. FM radio sound has replaced the old speakers. The snack bar has been renovated and the old ticket booth that collapsed under weather has been replaced. The drive-in features first run attractions, The El Rancho Drive-In is privately owned and operated along with the Ozoner 29 Drive-In.

The 1952 Theatre Catalog had the El Rancho owned by Clifton Hall, Jr., Colchester Th., Downsville. The 1955-56 edition listed Hall as the only owner and added a capacity of 430. (That was Clifton R. Hall, Jr., who operated the indoor Colchester in Downsville, according to a 1952 Oneonta Star article. He still lived in Palatine Bridge on Nov. 14, 1957, when his mother-in-law, Caroline LeDorna Kent, died. That’s all I could find on him.)

The state police arrested the operator of a drive‐in movie theater in Palatine Bridge, N. Y., after nearby residents complained that they could see X‐rated films from outside the theater. Troopers said Elmer Rossi Jr. Fort Plain, operator of the El Rancho Drive‐In, had been charged with public display of offensive sexual material, a misdemeanor, and released in $100 bail. They said motorists driving along Route 5 and nearby residents had complained that they could see the movie screen. The movies were “Coming of Age” and “Night After Night.”

Opened with “That’s my boy”.