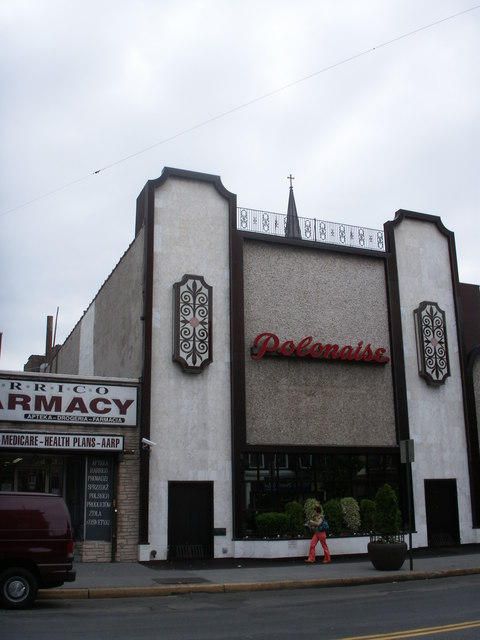 The Crystal Palace Theatre was opened in 1910. It was closed as a movie theatre in 1926. It was last used as a banquet hall known as the Polonaise Terrace, which was closed in 2013.

Here’s the official website of the banquet hall that now occupies the site: Polonaise Terrace.

Includes some interior photos. Appears all the rooms have been completely remodeled. Wonder if the foyer retains any original decor. Doubtful.

Wow, this was a real surprise to me. While I always knew that Greenpoint’s other catering hall had once been a movie house – the Nassau – I never thought that the Polonaise Terrace site also had a cinematic past.Since the Polonaise was only established around 1960 – or nearly thirty-five years after the demise of the Crystal Palace – the chances of anything of the old theater remaining in the present structure is just about nonexistent. This is further underlined by the fact that the Polonaise, as noted in the Building Dept. web site, occupies the address range of 144-150 Greenpoint Ave. This strongly suggests that the old building was demolished along with its neighbors and then replaced by the catering hall. (I tried to gleam additional information on this point from the web site, but the pertinent pages were not currently available. I’ll try again.)In consulting the Brooklyn Theatre Index, which contains essentially the same scant information noted in the introduction, I noticed that several non-cinematic theaters were situated at 144 Greenpoint and that, after 1897, it hosted the Greenpoint Sporting Club. So, the Polonaise sits on ground that housed more than just the Crystal Palace. It really is incredible just how many movie theaters served Greenpoint during this time. The American – later the Chopin – Theatre was situated just around the corner and five more theaters – the Midway, the Green St. Arcade, the RKO Greenpoint, the Garden and the Meserole – could be found within a few short blocks of this site.

I was finally able to access the Building Dept’s site for this building and can report the following, which basically reinforces the comments noted above.   While a new certificate of occupancy permit was filed in 1926 – the year the movie theater closed – unfortunately, the document is blank. Thus, we cannot identify the theater’s immediate replacement. In 1948, a new Certificate of Occupancy was filed for 150 Greenpoint to develop first floor stores and upper level factories on this site. This was probably the use that the catering hall replaced in 1961, when it was awarded a permit to open up.   In 1940, a permit was granted to establish a restaurant at 146 Greenpoint – the building situated between the old theater and the Greenpoint Sports Club. This was ultimately incorporated within the current catering hall.   Since no demolition permits are included in the record, it is possible that the former uses were incorporated within the catering hall’s superstructure. However, given the extensive renovations that occurred in 1961 – and that also happened in 1982, when the catering hall underwent a major upgrading – the chances of anything cinematic remaining at the current site are virtually non-existant.

I apologize for the fact that my past two comments were not broken into individual paragraphs. However, try as I might, the final product just came out as one big paragraph. Since this did not occur when I posted something from another computer, this might be a problem at my end. In any event, I am sorry if my posts are coming accross as a big jumble.

The Crystal Palace (a/k/a Polanaise Terrace) has closed as of 9/30/2013.The building will soon be demolished and turned into a high-rise of condominium apartments.

Thanks for this update. The Ponanaise was such a local landmark in its day and it will difficult to see life in Greenpoint without. But I guess goes on.

While the Polanaise Terrace did close in 2013, it was never demolished and has remained vacant since that time. Given Greenpoint’s very hot real estate market, that is very surprising. Anyhow, an article in today’s DNA NY states that something called the Brooklyn Night Bazaar will call the old building home next September. So, the old place is still there – for the time being.

Alas, a recent article indicated that this site has now been sold to a developer who will presumably evict the Brooklyn Night Bazaar, demolish the site and build an expensive condo. Given Greenpoint’s booming housing market the only thing surprising about this is that it has taken so long.