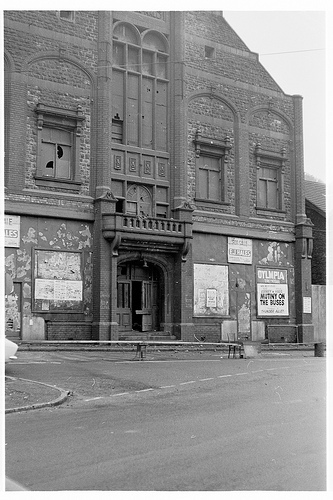 Located in the town of Ebbw Vale, Gwent. The Palace Cinema opened in 1912 during the cinema boom in the South Wales Valleys. The Central Hall was a general assembly hall, when converted for cinema it became the Palace Cinema. Around 1953 architect David Evelyn Nye was employed to make alterations to the proscenium to allow for widescreen films to be screened. It was closed during the late-1950’s and remained derelict but standing. Local people would use the doorway to shelter from the rain while waiting for the bus.

The cinema featured posters for films showing at other cinemas in Ebbw Vale and Tredegar while it remained unused. Falling into disrepair the Palace Cinema was eventually demolished during the late-1980’s and the area it stood on is now nothing but landscaped grass leading up to an housing estate that stood behind the cinema. The Palace Cinema became an eyesore and yet remained standing for more years than it should have. Charlie Chaplin performed here and mentions the venue in his autobiography.