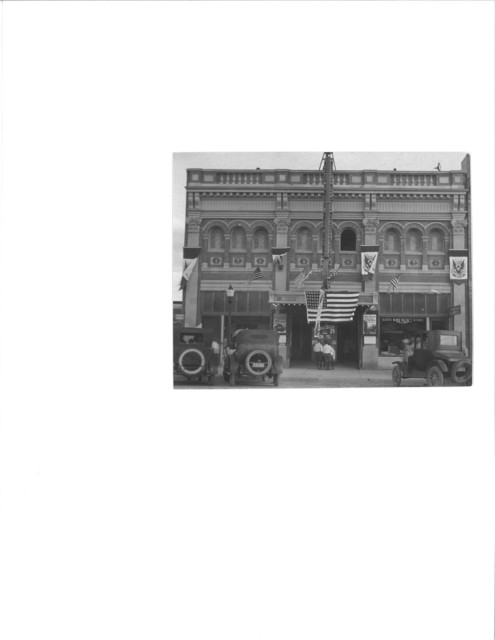 Originally opened as the Star Theatrein 1917. On November 28, 19371 it was renamed Carbon Theatre. It is located on E. Main Street, adjacent to the Price Theatre.

The Carbon Theatre was closed on April 27, 1952. On September 4, 1952 it was reopened as the New Cinema Theatre. It was closed in 1960. Today it houses Southeast Paint store.

The Carbon Theatre is listed on the National Register of Historic Places.

The NRHP Nomination Form for the Star/Carbon Theatre building is available here in the pdf format, and here in Google Documents quick view form.

The Star Theatre was built in 1923-24 by the Georgedes brothers, and was designed in the Classical Revival style by Salt Lake City architect J. A. Headlund. The theater was leased to a series of operators, In 1964, members of the Georgedes family sold the building to Duane and LaVerne Steele, who converted the theater into retail space.

This web page has a very small interior photo of the Star Theatre’s auditorium, published in the local high school’s yearbook in 1924 (it’s the ninth photo down in the left column.)

The Star Theatre launched in 1917 in downtown Price on a 20-year lease. It converted to sound. Under new owners, it was renamed the Carbon Theatre relaunching after a streamline modern refresh on November 28, 1937 with the film, “The Texas Rangers”. It closed as the Carbon briefly after an April 27: 1952 showing of “Oklahoma Annie,” On September 4, 1952 it was taken on by Motor-Vu operator Joe Santi and renamed the New Cinema Theatre showing “Flesh and Fury” with “Colorado Sundown.” In 1955, it was equipped with a widescreen projection to show CinemaScope films.

The Cinema Theatre closed in 1960 and was auction in 1961 to raise funds for back taxes owed. An optometrist moved into the building.