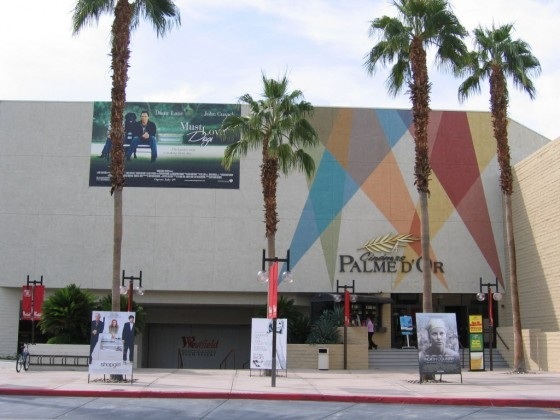 Opened by Metropolitan Theatres on November 5, 1983. This seven-screen art house is located in the rejuvenated Westfield Palm Desert mall (formerly the Palm Desert Town Center). After closing, the multiplex was redesigned with a “French cafe fee” and now shows a mix of Hollywood, foreign, and independent films.

“The Palme has been created by people who love movies. Every year, there are powerful, challenging, surprising, thoughtful, unusual, shocking, and important films that are never seen in the Coachella Valley. We are committed to changing that.

The Cinémas Palme d'Or will exhibit the widest selection of art, independent, foreign, documentary, experimental, and classic film in the region. The sophisticated, discerning film fans that reside in the desert deserve to see the best that film has to offer…without driving to Los Angeles.

We set out to create the desert’s premiere address for cinephiles. The creative team, which includes Palm Springs-based designer Jeffrey Jurasky, has transformed a deserted, rundown multiplex into a state-of-the-art, high end, 7-screen arthouse that is unparalleled in the region. Film fans are greeted by a lobby with a French Cafe feel in tones of grey, sage, mustard, and pumpkin. The flooring is a mix of highly-polished Indian slate and custom-designed carpet. The dramatic, lowrise concession counter is accented with granite, and restrooms have been re-designed and re-modeled to match The Palme’s contemporary feel. The focal point of the lobby is the beautiful configuration of decorative, hand-painted, backlit umbrellas artfully hanging from the ceiling.

We are committed to technical excellence at The Palme. We have enhanced our sound systems for all digital sound formats encompassing Dolby Digital, DTS Digital, and Sony Dynamic Digital Sound. Film lovers can expect a crisp, clean 35mm picture with future plans for 70mm presentation and digital projection. Our pledge is that you will see every movie as the filmmaker intended.

The partners that have created The Cinémas Palme d'Or are a diverse group. Alise Benjamin is a successful movie producer who resides in Rancho Mirage. Brian C. Tabor has been in the theatre business for 25 years. Andreas Mauritzson is a Coachella Valley-based businessman. And Steve Mason is a nationally-known radio and television personality. We are united by our love of movies.

The Palme d'Or is, of course, the award given to the best film at each Cannes Film Festival. Our slogan also borrows from the French. “The Grand Prix of Cinema” translates literally as “the grand prize” or simply, the best. Our mission is to bring you the best selection of art, independent, foreign, documentary, experimental, and classic films. We are committed to offering you the best service, the best ambiance, the best cafe menu, the best technical presentation, and the very best overall movie-going experience in the desert."

In July 2016 it was taken over by Tristone Cinemas and renamed Palm Desert 10.

The gem of the desert. I love that it is privately owned and operated and not a greedy circuit.

According to his wiki article, Bryan Cranston of Breaking Bad fame is a part owner of this cinema.

This opened on November 5th, 1983 with 7 screens by Metropolitan theaters becoming the first multiplex cinema as Town Center Cinema 7 in the area. Grand opening ad in the photo section.

November 4th, 2016 full page colour ad in the photo section. they ran these a lot.

Hi, do we have any recent photos of the interior of this theater?