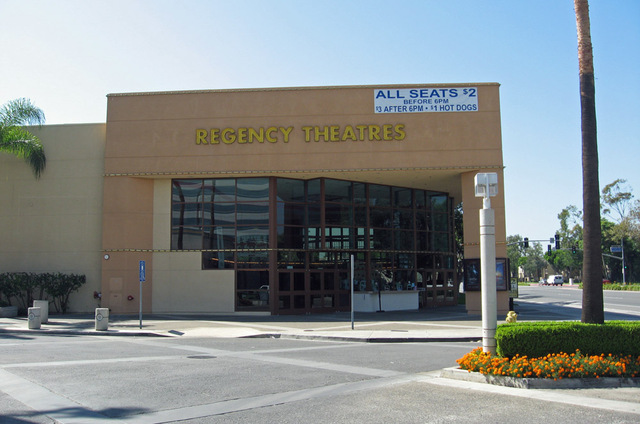 Opened on November 22, 1985 by Edwards Cinemas. It was later taken over by Regency Theatres operating as a discount theatre. It was closed January 26, 2017 and was converted into a church by 2021.

I dropped by one of my favorite childhood theaters this weekend which now operates as a discount house. Happy to report that the 30 year old establishment continues to thrive and is well looked after by Regency. It’s a perfectly preserved relic from the 80s. It’s amazing they can stay in business with such low prices. That said, business was booming on the day of my visit.

Theater is permanently closed as of February 2017.

Was one of my favorite discount theaters.

Sad news. Just over 30 years of operation. That’s a pretty good run. So many memories. This one hurts.

Sad to hear of the closure. I think the first film I caught here was Eddie Murphy’s “Harlem Nights” with a bunch of buddies during Thanksgiving break in 1989.

It was always a nice, comfortable place to catch a flick. No complaints.

Newspapers listed it as “Charter Centre”.

Such a bummer. This was one of the last Edwards theaters still standing from the ‘80s. Charter Centre was a nice theater for a long time, even up until its closing. I went there twice in the last year and a half and both times, the theater was very busy. The theater was well maintained.

There was one pretty big auditorium which had 70mm capability on the right side as you walked into the lobby. On the left were at least two decent sized theaters. In the back of the complex were smaller theaters.

I’m bummed I didn’t take more photos before it closed. It lasted just a little bit longer than Cinedome in Orange.

The only theater that is still operating as a cinema from the ‘80s Edwards era, I believe, is Irvine University.

Films I saw at Charter Centre: