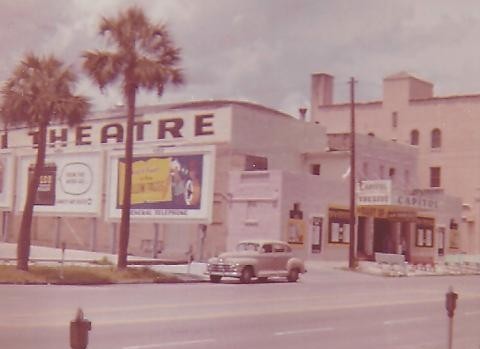 Opened as an airdome in September 1925. A retractable roof was constructed in 1928 which was later made permanent. In the early-1940’s, the Capitol Theatre was operated by Paramount Pictures Inc. through their subsidiary E.J. Sparks. It was still open in the early-1960’s when I saw “Caltiki, the Imortal Monster”, “Slightly Scarlet”, and “Marilyn” there. In 1965 it was briefly renamed Family Theatre. Later it started showing showing more risque movies like “Promises, Promises”. Finally operating as the 1st Street Theatre. It was demolished in 1968.

It was located just north of downtown near Williams Park.

I uploaded the first ad in this theatre’s photo section from September 23rd, 1925.

In researching the closing date of the Capitol I found the theatre had changed names twice. January 5 1965 was the theatre’s final day as the Capitol. The last two features were “Love on Credit” and “Burlesque Girls.” Based on the daily ads adult entertainment had evidently been the Capitol’s standard fare for some time.

Between May and June of 1965 the theatre reopened as the Family Theatre with 2nd-run double and triple features. Then on February 18 1967 the Family Theatre became known as the 1st Street Theatre featuring (once again) adult films. The opening day double feature was “Love on Credit” and “Burlesque Girls.”

According to a published ad that appeared on July 4 1967, the theatre was to feature live burlesque beginning July 19th. But this never occured as the theatre closed a few days before the 19th and evidently never reopened. The theatre time clock listed the 1st Street Theatre as “closed for the summer.” A review of the listings through December of 1967 did not show any reopening date.

I’ll post some ads under the photos tab shortly.

I recall the “Capital Theater” floor was sidewalk blocks.

The Tampa Bay Times of January 16, 2002, had a brief history of three early airdome theaters in St. Petersburg. The article says that the Capitol opened by John Gillooly in June, 1925 as an airdome, but a mention of the house in the July 4, 1925 issue of Motion Picture News said that construction on John Gillooly’s airdome theatre was not quite complete and the opening was slated for August (rivest266 notes above that the first ad was dated September 23.) The Times said that a retractable roof was added in 1928. The house was later completely enclosed. The article also mentions that in 1965 it was briefly renamed the Family Theatre, which is noted in Nick DiMaggio’s comment above. However, the article didn’t mention the final name of 1st Street Theatre. It does say that the theater was demolished in 1968.