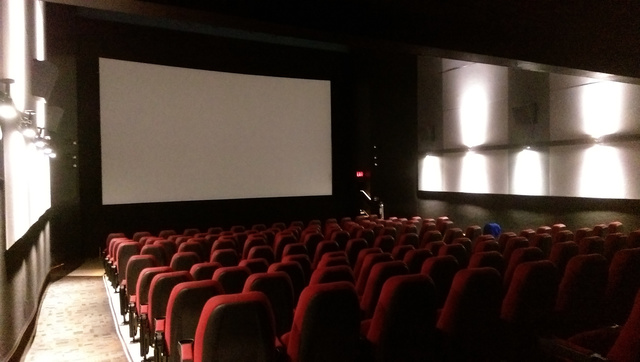 Seating is listed at 3,647 with the smallest auditorium seating 138 and the largest 336 with the IMAX seating 271.

Any further information on this theatre would be appreciated.

The IMAX theatre in this complex opened January 23, 1998, and was the first ever installation of IMAX’s 3D SR projection system. It features a 72x59' screen – I have some great memories of watching IMAX documentaries here.

In June 2011, the theatre was converted to IMAX Digital, much to my disappointment. However, for the run of “The Dark Knight Rises”, one of the 15/70mm SR projectors was reinstalled, and the movie was projected from film – which was an amazing experience. While they’re now back to using the digital projectors, the projectionist I spoke to after a screening (who was flown in by IMAX Corp. from Toronto for the duration of Dark Knight Rises’s run) mentioned that they’re going to keep the SR projectors around in case they ever need them again, and there’s plans to upgrade the theatre to IMAX’s next-generation laser projection system as soon as it goes on the market.

This is to be part of the Cineplex Entertainment chain since Empire wants out of the theatre business to pay for the Safeways out west.

…and once again me, this will be rebranded as Scotiabank Theatre Bayers Lake later this year.

Also it should be noted that several changes will be taking place to this location over the next 2 years. The lobby area will be undergoing renovations to better reflect the standards within Cineplex, which will mean an expanded and refurbished arcade, a re-location of the lounge space with new and better funishings, and a new box office located more apparently as you enter the building. Additionally, one of the auditoriums will be renovated and converted into an Ultra AVX; Cineplex’s brand of premium large format theatres, which will include reserved stadium seating, Dolby Atmos Surround Sound, modified screen, and RealD 3D projection. Finally, the back right corner of the building will receive extensive renovations as this location will be the first in Atlantic Canada to offer Cineplex’s VIP Experience, which will include a licenced lounge, sports bar, VIP concessions, restaurant-style menu, and 3 VIP Cinemas which include reserved, leather, recliner-style seating, swing-out tray-tables, and in theatre attendants (from which you can order and have food/drinks delivered to you up to the commencement of trailers). With all of this in mind, it would be prudent to update the name at the top, as well as the image in about 2-3 years time once all the major changes to the building have been completed.

Since Cineplex bought all Maritime theatres, the name “Cineplex Cinemas” serves as a placeholder for the cinemas there until they renames them to Galaxy and SilverCity (e.g., Galaxy Cinemas Millbrook, SilverCity Fredericton Cinemas, etc…)

Actually, Cineplex is no longer using the SilverCity brand name for new theatres: all of their recent theatre openings have either been using the “Cineplex Cinemas” or “Scotiabank Theatre” brands, with only a few “Galaxy Cinemas”. At all the Halifax area theatres, they’ve installed permanent signing that says “Cineplex Cinemas” on all theatres, except this theatre, which is now called “Scotiabank Theatre Halifax” (no idea why the name was recently changed on here.) Further to that, one only needs to look on the Cineplex Press Releases website to see that this theatre was officially renamed as such:

The IMAX Screen was opened a month later, and was one of IMAX’s first forays into multiplex cinemas (as well as the first in Canada, I believe.) There was a fair bit of controversy at the time about the location choice, a bit outside the city centre, as a competing group of business-people had been proposing an IMAX Theatre to be located in Downtown Halifax, and were quite upset that IMAX chose Empire’s proposal over theirs.

The theatre complex was an immediate hit, and in 1999, five more auditoriums (13-17) were added in a new wing, and auditoriums 3-4 and 11-12 were renovated with stadium seating. To this day, auditoriums 2, 5 and 6 still don’t have stadium seating, and are the only auditoriums in the Halifax area to completely lack it. However, the screens are of a good size, and they’re still good places to see a film.

In 2010, the complex underwent its first round of major renovations, and auditorium 1 was removed to make way for an expanded concession stand and new washrooms. The IMAX theatre was renumbered #1 (from #18), and all other auditoriums kept their number.

In 2011, all auditoriums, including the IMAX theatre, were converted to digital projection.

In 2013, the complex was taken over by Cineplex, who have left their mark on the complex in a big way, completely transforming the interior finishings.

Auditoriums 7-12 feature underwhelming screens that are quite far from the stadium seating, and pale in comparison to those at Park Lane and Dartmouth Crossing. The other auditoriums feature stadium seating of a more modern design, and work quite well.

As this complex prepares to celebrate its 20th anniversary next year, we shall see what Cineplex has in store for it…

This was the first IMAX in a multiplex in Canada. Edwards Cinemas opened one in early 1996 in Orange County in California.