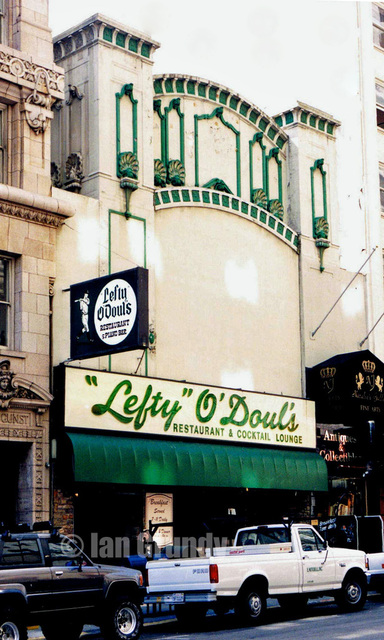 It has been Lefty O'Doul’s restaurant & cocktail lounge for longer than most people can remember, but a look at its upper facade reveals what is unmistakably a wonderfully theatrical-looking assortment of ornamentation. Presumably, some remnants of the theatre’s interior exist above and behind the present restaurant interior. When seen in November 2008 the building was vacant.

My thanks to Jack Tillmany’s research for these facts.

The October, 1916, issue of The Architect and Engineer of California has an item concerning what must be the Theatre St. Francis, although it calls it the St. Francis Theater. The item also names a different architect for this house than the description does. Here is the relevant part of the item:

“It is announced that plans for the big moving picture theater at Fourth and Market Streets, San Francisco, are being made by Alfred Henry Jacobs, architect of the recently completed St. Francis Theater on Geary Street. The latter theater has occasioned some favorable comment on account of certain unique features, one of which is the placing of the picture screen at the entrance end of the theater, instead of forward. The seats all face the rear, the idea being to avoid the glare of the pictures when entering the theater.

The magazine might have been mistaken about Jacobs being the architect, but that doesn’t seem likely as this publication was usually quite reliable, and the item was published about the same time the house opened. It’s also interesting that the item reveals the St. Francis to have been a reverse theater. Perhaps evidence of the theater’s original projection booth still exists at the back of the building?

Great architecture, glad this one is still standing!

I still haven’t found any evidence that N. L. Josey was an architect, despite the attribution in the article in The Moving Picture World that Tinseltoes linked to. I’ve not found his name connected with any other buildings, nor does it appear in any available database of architects. The only period reference to Josey as an architect I’ve seen is the one in the MPW article. An earlier item from MPW, as well as items in Variety and The Music Trade Review from 1916, say that N. L. Josey was building a theater on Geary Street, but don’t mention an architect. An item in MPW of January 6, 1917, indicates that Josey was the owner of the Theatre St. Francis, though apparently he was not a very successful businessman:

“San Francisco, Cal. — The Theater St. Francis, which was opened last October by N. L. Josey, is now in the hands of creditors. A meeting of these was held a few days ago in the offices of Attorney Leo Kaufman and a committee was appointed to look out for their interests. Charles A. Rosenthal, Jr., who has been manager of the house since it was opened, will continue in this capacity.”While Josey was probably not an architect, and the plans for the Theatre St. Francis probably were actually prepared by Alfred Henry Jacobs, as indicated in the article from The Architect and Engineer of California I cited in an earlier comment, it is also likely that Josey had a lot of input into the design of the theater. This is indicated by an article about the house that ran in San Francisco’s weekly journal of literature, art, and culture, The Argonaut in late September, 1916:

“When the Theatre St. Francis opens on Monday evening, October 2d, at 8 o'clock, citizens of San Francisco will see the first theatre in America that is not a theatre—that is, not a theatre in the commonly accepted sense. The St. Francis, from tile pavement to projection-room, and from double roof to basement music library, is a pioneer as a perfect photoplay house—designed and built scientifically for the best showing of the silent art of the screen.

N. L. Josey, the man behind the St. Francis, knew there were very many reasons why the old type of theatre wasn’t exactly suitable for photoplay shows, so he set out, with scientific mind, to invent a new type of ‘theatre’ which would best suit the one and only purpose: to present, in the best possible manner, screen productions and only screen productions. The result of his work, and the proof of his science, is the Theatre St. Francis, at the corner of Geary and Powell Streets.

Unique features and innovations abound. The sidewalk itself in front of the theatre is an area of two-toned tiles, laid in a pleasing geometric design. The lobby is of fair size, with ticket booths at the sides—thus leaving plenty of room to pass in and out of the theatre. The entire façade of the theatre consists of an immense window of photographer’s glass, around which a stained-glass border runs, the whole set in a concrete ‘front’ embellished with art nouveau modelings. On this window can be projected, from behind the glass, colored effects or pictures.

Again, the St. Francis is a ‘reversed’ theatre—that is, patrons in facing the screen also face the street, as the mammoth screen is behind that beautiful glass façade. So in passing into the auditorium to see the photo-play the seats reached first are the ones closest to the screen. Although the building is even better than Class A for fireproof construction, still in the event of panic the entire house can be emptied in two minutes, because it is built to save time whether one is entering or leaving. Stretching back on a comfortable incline are rows of especially comfortable chairs. And the seats in the balcony are just the same as those downstairs, although the admission prices are lower for the balcony. The mezzanine floor contains the ladies' rest room and the gentlemen’s retiring room —both of these fitted up in the best possible manner for convenience and comfort.

The interior decoration is absolutely new in America, as far as large buildings are concerned, being l'art nouveau throughout, soft colorings and simple treatments. New standards have been adopted, in order to make the Theatre St. Francis the only one of its class in the United States. Heating apparatus is provided for cool days and nights, the air itself being warmed as it enters the theatre. The floor coverings are of the best soft colored velvets. Bubbling drinking fountains are placed handy to all parts of the house.

And the policy of the house is in keeping with its structural beauty. Manager Rosenthal and his co-workers decided long before the ground was broken that no so-called sex dramas or other pathological or harmful photoplays would ever be shown at the St. Francis. The sign, ‘No one under sixteen admitted,’ will never be seen at the St. Francis box-office, because the scheduled plays are of a class that that sign does not apply to. There will be frequent changes of programme, the prices will be moderate, and there will be a section where seats can be reserved. Only first-run pictures will be shown. The opening attraction will be ‘Ashes of Embers,’ with Miss Pauline Fredericks in the stellar role. Music under direction of Messrs. Jaulus and Polak—the former on opening night.“I’ll keep looking for any information indicating that N. L. Josey was an architect, but I don’t really expect to find any. I’ll also keep an eye out for at least one more source connecting Alfred Henry Jacobs to the Theatre St. Francis. I think that’s more likely to exist.