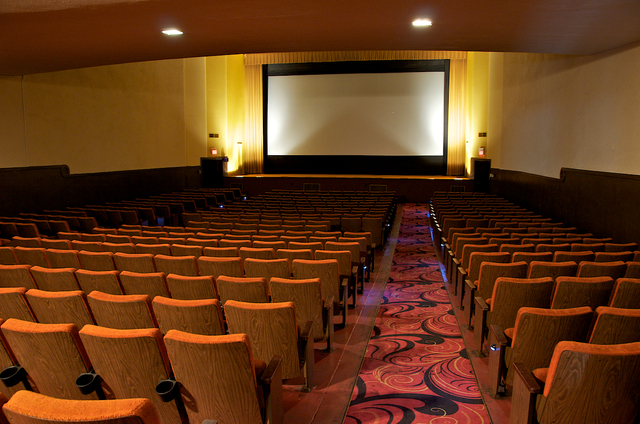 The Hornbeck Theatre was opened by Griffith Consolidated Theatres Inc. on July 10, 1947 with Don Defore in “It Happened on 5th Avenue”.

In 1973 the balcony area was remodeled into a piggyback twin–named the Penthouse. Currently the theatre is operated by Jones Theatres, Inc. in a joint venture with Carmike Cinemas Inc.

There are 509 seats downstairs (Hornbeck) and 286 upstairs (Penthouse).

The architect for the original Hornbeck building was Jack Corgan and Associates. Architect on the remodeling and creation of the upstairs Penthouse Theatre in 1972 was Larry Blackledge and Associates. It was closed on September 29, 2020 with repertory screenings of “Back to the Future” & “The Goonies”

The Penthouse was my favorite of these two. The Hornbeck seemed to have not-so-good sightlines despite having a large screen. The acoustics were not very good either. Too much echo at the time. The Penthouse was great though. Intimate and nice size screen for the seating. I remember seeing Porky’s there several times with a full house each time. Only thing I worried about was if the building could hold the wieght. Still, a great place to see a flick.

From 2010 a photo view of the Hornbeck in Shawnee Here and Here.

This is what the Hornbeck Theatre neighborhood looks like now days,
View link

Griffith Consolidated Theatres, Inc., Circuit opened the Hornbeck Theatre , named after owner Adam Hornbeck, on July 10, 1947. It was constructed in 1946 but wartime steel shortages prevented its completion until construction completed in 1947. Eugene Gilboe of Dallas created the large abstract morals in the theater.

it’s now running as a joint venture with AMC. listed on the AMC site as Hornbeck Twin. https://www.amctheatres.com/movie-theatres/oklahoma-city/hornbeck-twin

It appears that only one half of the balcony is used for screening. What is the other half used for or was it not closed off?

Final showings for the AMC Classic Hornbeck Twin: September 29, 2020 with repertory showings of “Back to the Future” and “The Goonies”