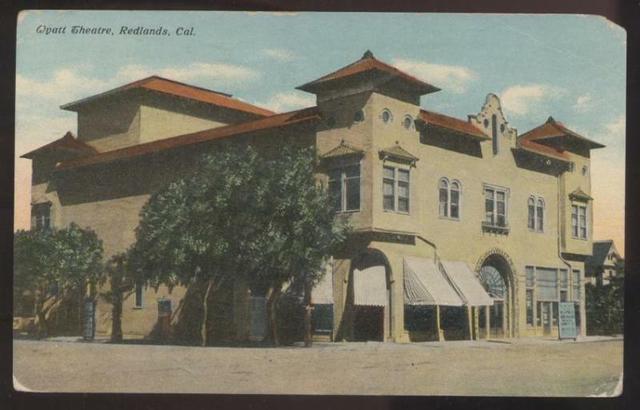 The Los Angeles Times on November 7, 1904, announced the opening of the $40,000 Wyatt Opera House. It lessee was H.C. Wyatt, prominent in Los Angeles theatre circles as the operator of the Mason Opera House. Because of a glitch the opening was previously delayed, causing the cancellation of many shows. An LA Times story on October 29 said that 1,180 theatre seats were lost, stolen or strayed somewhere between Los Angeles and Redlands before they were finally found. The manufacturer said they were to be installed by October 1.

A Times article from December 18, 1928 says that the city-owned Wyatt Theatre and the Majestic Theatre were ordered closed by the building inspector. The West Coast Junior circuit had been leasing the two theatres but they were apparently not showing movies at the time because the new West Coast Theatre would soon open. It was noted that the theatre circuit also leased the local Liberty Theatre, which was unaffected by the condemnations.

A Times article from December 16, 1929 said the Wyatt Theatre was finally being demolished. The contractor in charge of the job said the building was due to collapse anytime on its own. The chimney was flimsily attached to the rest of the building and a small earthquake could have made it plunge through the neighboring Piggly Wiggly store. The proscenium arch was in danger of collapse from the weight above because of the snapping of several roof braces.

The contractor also said that theatergoers had been in danger for years. The article said, “He never saw a greater fire trap and that scores would have undoubtedly perished had a fire started during a stage performance.” The city continued to own the property of the demolished theatre for 25 more years until they finally sold it in 1954. A 1964 article in the Redlands Daily Facts placed the Wyatt Theatre at the northwest corner of Orange Avenue and Colton Avenue. In 2010 the property is undistinguished as a strip mall. According to Bradley Weisberg, whose thesis on the Wyatt Theatre is available at the Smiley Library in Redlands, the architect was a Mr. Light from Los Angeles.

This item about the Wyatt Theatre is from the September 16, 1916, issue of The Moving Picture World:

“The Hendricksons, well known in Redlands, have leased the Wyatt theater for the coming season. Plans are being made for improvements so that big feature productions may be shown. Two "Power’s 6-B” motor-driven projecting machines will be used in the theater and in the balcony a machine booth, absolutely fireproof, will be built. They have also made plans for a 2,000-seat Airdome, which they expect to erect next spring and operate.“

The New York Public Library has this postcard view of the Wyatt Theatre, undated, but probably from the 1910s.