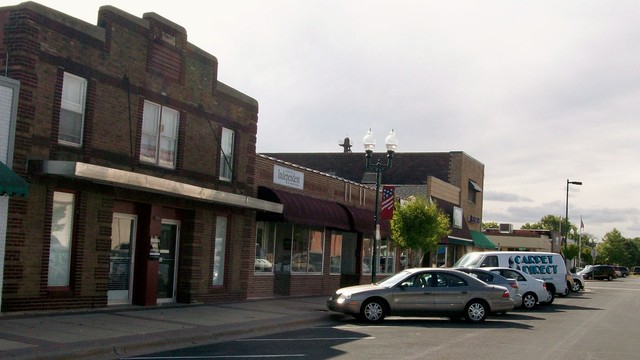 The Lyric Theatre was opened around 1931, and continued until at least 1950.

Closed is highlighted, that is how this site does that, if it were demolished then the Demolished would be highlighted, confusing…I know. But yes the Lyric building is very much standing and I would like to see it kept that way. Thanks.

Sorry to see the Marquee has been taken down…

IIC said “Yea the top feature was finally removed last year. I think the owner of building was hoping to keep in intact but it became a hazard of falling on someone because it was rotting out.”

TAL, they do remove the word “Demolished” when one is actually not. The highlighted “Closed” box will remain along with teh 1 Screen when they get around to updating the correct address. I’m familiar with how the site works, as I am a 17 year contributor with 11K+ plus photos added. Plus the research and adding of multiple theatres previously unlisted.

High level offenders? Before I post photos I do a reverse image search on every one, research and assign credit to the oldest source I can find if there is one. Some photos come up with zero history, so I use “courtesy of” and/or “via” the last source where I found them before the reverse image search brings up nothing. On print ads I always try and do “credit of” the newspaper from where it came from if/when available. Print ads often do not come up in reverse image searches, unless they include famous poster images etc. I post far more photos than I do print ads anyway. Many photos are from Public Shares on Facebook, and also get the reverse image treatment unless they are directly from historical societies, museums or specific photographers and/or their collections who are credited originally. I often include website links as well that include the image after crediting them in advance. On Facebook I often ask for permission, and get told “it wasn’t mine to begin with”, so I reverse search it again. I do the same with family photos. So you will often see “credit whomever, taken by their grandfather” etc. I especially ask permission when they are shared to a “Private Group” that prohibits sharing of their images publicly. Because tens of, if not hundreds of thousands of the theatres are long gone, the only record of their existence is old photos from outside sources. As we weren’t alive to photograph them ourselves. I personally have removed hundreds of photos when contacted and the research used has proven to have had the wrong credit or source, and the original source then declined permission to post them even with proper credit attributed. Those images can often be found on websites, so just sharing the website link will still allow members to see the images, in the manner the credited source intended them to be seen. Many members post photos with absolutely no credit or history whatsoever. Some of us make a much better effort to credit sources. And again, I remove them when asked to. As do teh Admins I assume when they are contacted directly. Plus there are 5 people ahead of me that have posted 1000-7000 more images than I have, and you only named one of them. So it is odd you would choose this particular theatre to post your one and only comment since joining this site less than a year ago according to your username. Particularly when the subject of “photo sources” is not mentioned in any of the nine comments above for this theatre. It sounds like your issue should be brought to the CT Admins directly, if you feel rights to photos or a lack of permission has taken place on any given photos individually. Because the Admins don’t double check every new comment, on a theatre with minimal hits such as this one. One issue I have is that we are not notified when a comment appears under a photo, so we don’t know the original source has complained, unless they post in the regular comments in instead of or in addition to the comments beneath the photos. No money is being made off the photos that are shared to this website to my knowledge.

Duly noted. My understanding of fair use in the ever evolving digital photography landscape, is that the photos posted on a site such as this and others are considered for educational and research purposes, and clearly not for profit. I make a far better effort than most to track down original sources, and have asked permission both granted and denied. Some grant permission and specifically ask not to be identified if they were family photos. I will not need to “try to use it in court”, until that issue presents itself. The CT Admins would likely be contacted first I assume, and they would remove any photos of concern accordingly, in advance of any legal action that would require that as a defense either successful or not. But I do not speak for them. Again, why did you choose this particular theatre where only 2 maybe 3 previous people would see your interest in justice, instead of say a theatre in New York with hundreds of previous comments and contributors to interact with? Have you attempted to contact the CT Admins directly about your concern on this issue?

David, didn’t know your longevity on this site, no offense intended. I lived in Farmington for 18 years and am in love with old theatres. My dream on this one was always to buy it, restore it to a working theatre and let it be a community theatre for Farmington, as well as occasional movies. Dreams take money though, and I am not fortunate enough to have both dreams and money. That is why when I saw the marquee gone, it was another gut punch… I hope it doesn’t get demolished, Farmington has abandoned their Historical Commission…

Hi TAL, no offense taken. Those replies were to a newer member who then deleted their comments.

CT ADmins, still needs update as still standing and not Demolished. Address is 314 Oak Street. Industrial Impact Corporation has confirmed to me today 1/26/21, that it is still currently in use as their offices.

Studying the Sanborn maps and todays, it appears Farmington reassigned their addresses, what is 222 Oak in the 20’s is 314 Oak today. The Lyric was built in 1931 and probably took over the pool hall site next door.