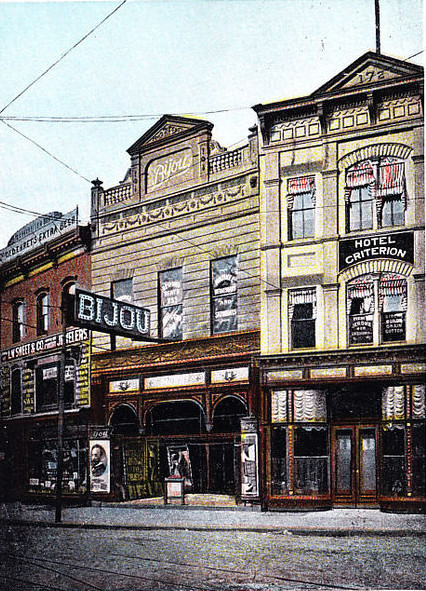 Originally built as the Hotel Criterion, it became the Bijou Dream Theatre by 1918. In January 1919 it was under the same management as B.F. Keith’s Theatre next door (which had previously been the Bijou Theatre, and later became the Palace Theatre).

where was this place?

I am not sure of the date of this photo. See also The Palace Theater, 172 Newark Avenue.

The Bijou Theatre in the photo currently at the top of this page is the house at 174 Newark Avenue that was later remodeled and renamed the Keith & Proctor Theatre. It eventually became the Palace, so the photo really belongs on the Palace Theatre’s photo page.

Later, there was a new Bijou Dream Theatre located next door at 172 Newark, in the building that was formerly occupied by the Hotel Criterion. It was in operation by 1918, but I don’t know how long it lasted. It was, according to an article in The Moving Picture World of January 4, 1919, under the same management as B. F. Keith’s Theatre next door.

This web page has a then-and-now photo of the buildings, the “then” photo showing the B. F. Keith Theatre in the former Bijou’s location and the new Bijou Dream in the former Hotel Criterion building. The original Bijou has been demolished, but the building in which the Bijou Dream was located, at 172 Newark, is still standing.

In 1910 there was a Bijou Dream Theatre in operation at 117 Monticello Street, but I don’t know whether or not it was related in any way to the later Bijou Dream at 172 Newark.