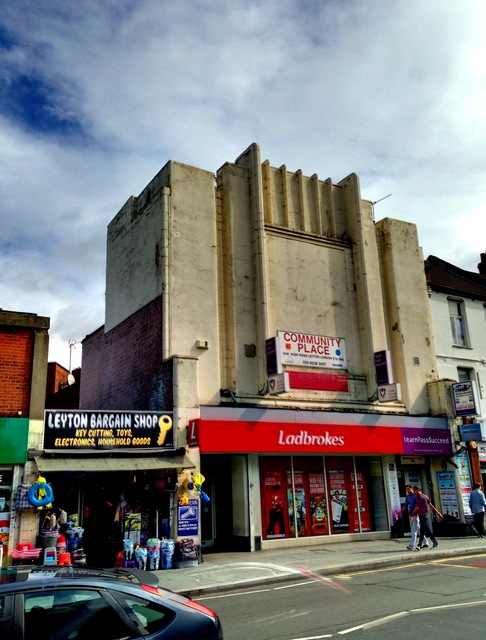 Located in the east London suburb of Leyton. The Ritz Cinema was opened by Associated British Cinemas(ABC) on 4th July 1938 with Joe E. Brown in “Fit For a King” and Fredric March in “The Buccaneer”. It was designed by the chain’s in-house architect W.R. Glen.

The small narrow street facade hides the bulk of the huge auditorium building behind. Seating was provided for 1,532 in the stalls and 886 in the circle. A Compton organ was ordered for the cinema, but was never installed.

The Ritz Cinema was re-named ABC from 19th October 1962. It was taken over by an independent operator and re-named Crown Cinema from 10th December 1978, but this was a short lived venture which closed on 1st December 1979 with “The Brute” and Kirk Douglas in “Holocaust 2000”. For a few weeks after closing as a full time cinema, there were late-night presentations of Kung-Fu films on Friday’s.

The auditorium was converted into a B&Q DIY hardware store, which later became a KwikSave supermarket, using the stalls area only. The circle level was sealed off by a false ceiling.

In recent years, a Ladbrokes betting office has operated from the foyer, with the remainder of the building converted into offices.