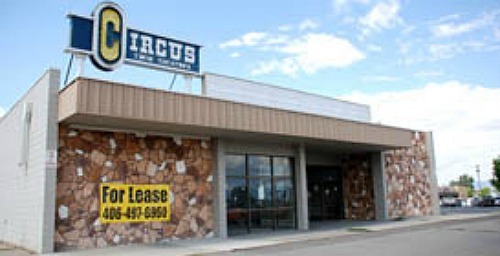 Theaters Operators Inc. (TOI) opened the $300,000 Circus Twin Cinema on February 18, 1972 on land next to the Sunset Drive-In. Former sheriff Chub Munger owned the Sunset Drive-In with his wife Mary and they were leasing the property to TOI. The two auditoriums in the complex, designed by architect Mel C. Glatz of Denver, had seating for 300 each. The Helena Independent Record later published a photo of their new Norelco platter system and noted that the projection system was computerized. The opening attractions were “Straw Dogs” and “Kotch”.

Even as the Circus Twin was being constructed, demolition of the old Marlow Theatre was being planned. The Helena Record Independent had reported in October of 1971 that the Marlow Theatre’s closing was being delayed because the city would be left without a theater during the winter. National General and its predecessors had run the Marlow Theatre since 1937 but had decided not to build a new theater in town. In May the chore of demolishing the Marlow Theatre finally began.

In 1974 TOI sold the Circus Twin Cinema to Carmike, who operated it until it’s closing. After 33 years the Carmike Circus Twin showed its last film on December 5, 2005. Carmike said that all employees would be offered jobs at their local Gaslight Cinema. The Independent Record noted that all seats and equipment were being removed from the building.

Ron, There was no Carmike cinemas until 1985. I uploaded the grand opening ad here.

Hey check out the error that can found on the session times table is calls Willy Wonka as Willy Wanka…im saving this one!