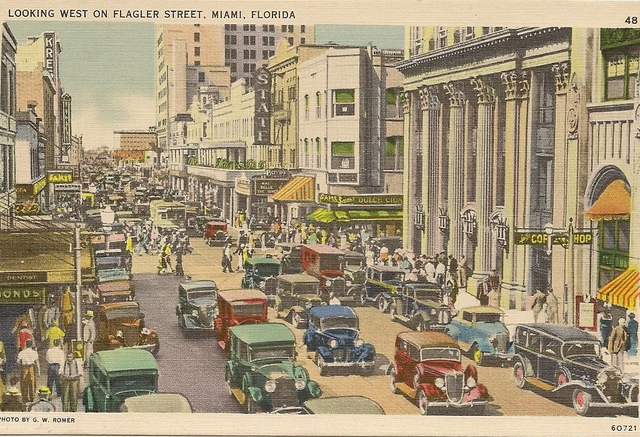 The Marco Theatre was opened in 1910. On October 26, 1914 it was renamed Fotosho Theatre with “In the Lions Den”. It was closed due to the 1926 hurricane but soon reopened and operated until 1930. It was remodeled and reopened as the State Theatre on November 9, 1930. It was operated by Wometco Theatres and on January 28, 1938 the World Premiere of “The Goldwyn Follies” was held at the 1,000-seat State Theatre. It was remodeled again in 1939 to the plans of architect Robert E. Collins.

The State Theatre was still open in 1956, but had closed by 1957. The Ainsley Building is now on the site.

MayfairMan, I love hearing the recollections and never tire of them. Since Miami is so transient and so many older people are not online, these memories may otherwise be lost forever, so bring them on.

I sometimes wish I could go back in time and hear the Mayfair cashier repeat; “Little boy, this movie is in Czech with subtitles. Are you sure you want to see this?”

Welcome to Cinema Treasures! I am happy to see another native participate in this fabulous website. I was born in 1957, so I missed out on a lot of the history of these theatres, when I was old enough to go to the movies, downtown wasn’t too secure, although I did frequent the movies, I never did get a chance to visit all of the theatres.

Like you, there have been a lot of folks that lived in the Allapatah and Wynwood areas who have made contributions. It’s funny that you mention the Shrimp Place! I remember going there with my Dad in the 60s. I also remember the Royal Castle, as well as the Kwik Chek next to the Seaboard RR Station. That area is now what I like to call the rust belt of Miami. I don’t know if you know this, but Miami Stadium was finally demolished a few years ago. It was sad to see what that place had become after years of neglect. It ended up a crack house, and a place where gangs hung out. The graffiti, and filth that surrounded it was deeply disturbing to me, because as a child I grew up in Allapatah. We moved from the area in 72.

I don’t know if you still live in Miami or have moved on to another part of the country. Personally I still live in Florida, just further north, about 32 miles, in Pompano Beach. Thanks for all your posts, I look forward to reading more of them!

Hmmmm… Where was the Strand? Stage Manager puts it south of NW 29th St. Louis of Pompano Beach pegs it at NW 33rd St, and my memory puts it at NW 24th St. I went to Robert E. Lee Jr Hi on NW 5th Ave at 31st and occasionally hung out at a candy store which, now that I think more about it, wasn’t too far from Lee, which would tend to support the 33rd St location. I haven’t been in Miami in about 15 years, and then didn’t get anywhere near this part of 7th Ave. So, has anyone IDed the Strand in a recent drive-by? And should we continue this thread on the Strand page?

Miamiguy’s posting on the Town Theater page has a link to a list of theaters in Miami and Miami Beach from the August, 1949 Southern Bell Telephone Book. It lists the Strand as being at 3033 N.W. 7th Avenue. Stage Manager was closest at 29th St., Louis of Pompano Beach next at 33rd St. I was way off at 24th st. Looking back at my previous comment, I guess I meant shouldn’t there be a Strand page?

The State must have had some prestige at one time. The January 15, 1938, issue of Boxoffice Magazine said that the musical film “The Goldwyn Follies” would have its world premier at Wometco’s State Theatre in Miami on January 28. It referred to the State as a “popular Flagler Street house.”

Here is a postcard view that clearly shows another building between the State and the corner. The marquee seems to read ‘BELLE OF THE NINETIES" which would make it 1934.

Not sure who is the moderator or manager of this site, but I wanted to thank you for all the information about the old Miami theaters, both downtown and in the Allapattah area. I opened a Facebook page on the Old Allapattah Area of Miami and contribute a great deal to the two sites “We Grew Up in Miami in the ‘60s and '70s” and “We Grew Up in North Miami in the '50s, '60s and '70s” You’re all welcome to visit and contribute to these sites, of course. I’m going to be using much of the information I gleaned from this site on the Miami and Allapattah Facebook pages. Again, thank you. Ben Arnold in Ft. Lauderdale

If the State was indeed the same building as the Fotosho, then it was opened in 1910 by F. E. McVeigh as the Marco Theatre, according to the 1925 book Historical Sketches and Sidelights of Miami, Florida by Isidor Cohen (Google Books preview.)

Thank you to Cinema Treasures for merging the Fotosho page into this one for the State after I posted that I figured out the Fotosho became the State by comparing photos.

Thank you Joe Vogel. In my enthusiasm I had forgotten that Isidor Cohen mentions in his book that the Fotosho had originally been the Marco (as did a comment by Al Alvarez on the Fotosho’s former page).

Here is a link to the full text of the “Development of Miami’s Theaters” chapter on a page by itself.

The Miami-Dade Public Library also has physical copies of the book.

The 1939 complete refurbishing plans of the State Theatre was drawn by architect Robert E. Collins.