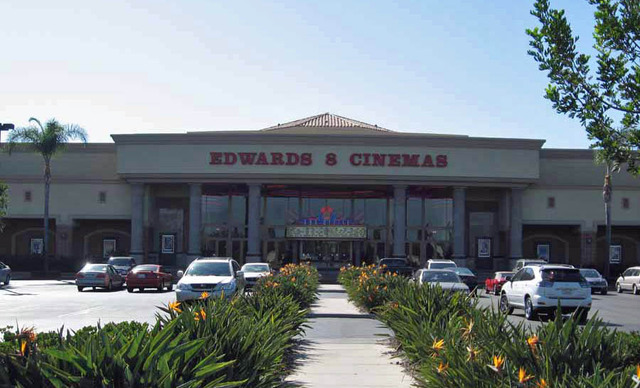 Edwards Westpark 8 opened on December 21, 1994, just seven miles away from the future Edwards Irvine Spectrum 21, which opened in November 1995. The reason given for the close proximity was that the Westpark was a neighborhood house while the Spectrum theater was built as a regional attraction. Given its location in the quiet Irvine community, when the Westpark first opened the neighbors complained about the bright lights. Edwards and the Irvine Company were quick to address those concerns and toned things down. At any rate for Edwards this was a time when they seemed to have no fear when it came to expanding. The theater was later taken over by Phil Anschutz after Edwards bankruptcy in 2002, and combined with United Artists and Regal Cinemas.

While at first they maintained a mainstream program, since 2006 it has evolved into an art house, with popular films thrown in. The crowd seems to skew to an older audience than the large stadiums. At the Westpark seniors, who perhaps seldomly go to the multiplexes, can avoid the younger crowds and see more mature fare.

The Irvine community is very diverse so sometimes the movies are diverse. The Ang Lee film “lust, Caution” did very well here, as well as the more obscure Asian films. The Westpark 8 is also now adding some popular Bollywood hits to the mix. They also throw in hit films, which have finished their run in the larger multiplexes. Go there on weekends and you will see a full parking lot. It was closed on September 14, 2022 due to the Regal/Cineworld bankruptcy.

Looks like the Westpark has gone digital. Caught “The Way” in theater #1 yesterday and the presentation was as bright and crisp as I’ve ever seen in 15 years of frequenting the place. Good news as the Westpark was notorious for having film break in the middle of screenings.

OC Register is reporting that Regal has closed this theater, effective immediately.

Stopped by the now-shuttered Westpark this weekend and noted a For Lease sign (posted a pic) in the window, which would indicate The Irvine Company is looking to keep the current stand-alone structure as opposed to demolishing it. Wish an indie chain like Regency would take it over.