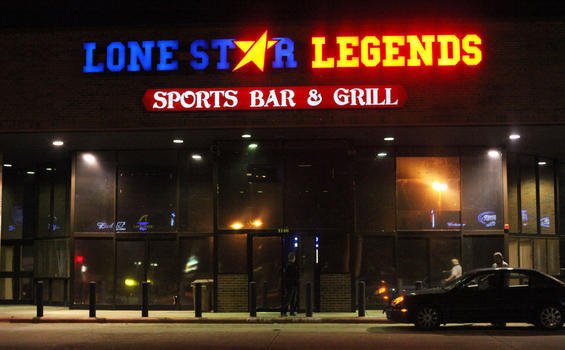 This UA multiplex was opened December 21, 1984 and operated until 2006. The building was occupied by Lone Star Legends Sports Bar and Grill. By 2018 it is a banquet hall.

Here’s a photo I took back in November of 2006 as they were converting the structure into a Sports bar. Enjoy.. Randy A Carlisle — Historical Photographer

United Artists purchased four acres of a 12-acre tract at the southeast corner of Beltline and what was once part of North Star Road in Garland in 1984 to build a multiplex. MPM Development would then build a 68,000 sq. ft. strip shopping center around the theater called North Star Crossing bringing additional traffic to the complex. The UA 8 North Star (often fused as Northstar 8 in ads) opened December of 1984 and, in its operation of just over 21 years, the theater remained a first-run house under the aegis of UA/Regal through its entire existence. The UA 8 South, the UA 8 Las Vegas Trail and UA 8 North Star were built much like the “second-generation” UA 8’s around the country: fairly non-descript but serviceable locations that weren’t destination multiplexes like the UA Plaza or the UA Galaxy but more neighborhood-centric and understated.

Unlike its first era of multiplexes, these UA 8’s had more soothing color palettes and indirect lighting. The smallest houses were 280 seaters with fairly uncomfortable chairs. At the 16-year mark, the North Star got some good news in that General Cinema closed its Richardson location in 2000 just 3.5 miles away which led to an uptick in customers at the North Star. For patrons, good news occurred when the UA MacArthur Marketplace megaplex mega-flopped in less than five years of service from 1999 to 2004. When the Regal shut the theater, the North Star was the recipient of the MacArthur seating. It was a nice improvement. Despite the new seating, the North Star wasn’t given a ringing endorsement from the chain. As Regal ramped up its digitally projected pre-show “2wenty” in most auditoriums in 2003/4, the North Star was largely left out of the transition which was a portent of things to come.

Regal shuttered aging UA multiplexes all over the Dallas-Fort Worth metroplex and beyond shortly after taking over United Artists. And when AMC opened its Firewheel Town Center Mall 18-screener in far east Garland on December 14, 2005, the North Star UA 8 was looking quite aged. Just one month after the AMC launch, the North Star closed for good on January 29, 2006. Few people bothered to show up for the final shows that evening. The property was updated for new business owners. First into the location in its post-theatrical life was a sports bar closing in 2011, then it was Legends Jumpin House closing in 2013, then it was briefly Quinceanera Reception Halls event center, then it was…. well, you get the idea. The theater’s conversion away from a multiplex – like so many others – has proven to be a challenge to the shopping center. And unlike the UA 8 Vegas Trails or UA 8 South that didn’t have the adjoining shopping center to be concerned with, those 8-plexes were more readily converted into stand-alone non-profit churches.

This opened on December 21st, 1984. It was billed as the Escape Plot. Grand opening ad in photo section.

The comment about the “2wenty” is incorrect. We did have the preshow at Northstar. And we got alot of complaints about it. We couldn’t start the projectors until the preshow ended. And the preshow slowly got longer over time. Making our shows start late. I mentioned it to a tech once and he could care less that we had complaints from our customers.

I really have to strongly disagree with this opening date for the Northstar. At the time I was working as a projectionist at the UA Prestonwood Creek 5, that was straight down Belt Line Road. Northstar’s projection booth wasn’t finished enough to build up their opening prints. So we at Prestonwood built all eight of them up. And screened them. Which was the only time I saw “Beverly Hills Cop” in a movie theater. When all of the prints were ready to go to the Northstar. The GM came over in his pickup and we loaded all of them up. I distinctly remember this was the week before Thanksgiving 1984. I’m almost positive that the opening date was the Friday before Thanksgiving 1984. Not to brag, if it’s even bragging. If anybody is an expert on the UA Northstar 8. It’s me. Out of the just over 21 years that theater was open, I worked 12 of them.

This was the closest theater to me when I was growing up in Rowlett in the 1980s, and my favorite one from before the megaplex era. I have so many memories tied up in this building: I saw so many films here. I wish there was some sort of initiative to preserve the 70s and 80s-era multiplexes as there has been with many of the 30s and 40s-era cinemas, at least for us aging Gen Xers who are watching so many of our childhood hangouts disappear.

The space was repurposed as a sportsbar for a while after it closed, but the bar relocated, and this space is now occupied by a banquet hall. Here is a pic I took today: https://www.instagram.com/p/BhacFfGhBDS/

My family was the ones who opened it on the 21st. It was suppose to be the anchor for the strip mall there but it never could get off the ground.

If you are the expert Cpt. Rob….you then should remember my dad

My tag says CaptainRob. Rob as in Robert Murphy. Assistant Manager of the UA Northstar 8 from January 1, 1994 until it’s closing in January of 2006. I was then transferred to the UA Lakepointe 10 in Lewisville. I was hired by the GM Bill Skinner, whom I knew from his AMC days at the Prestonwood and later at the UA Town East 6. I has previously worked with the previous GM Mike Graham when he was an Assistant Manager at the UA Prestonwood Creek 5. I was shocked at the circumstances at which he had to leave the Northstar. I worked with John Devine and later Paula Jackson (who had previously been Assistant Manager, aka Paula Eargle) as GMs prior to Mr Skinner’s return in 1998. The November 1994 date I gave may have been a soft opening for the Northstar. I still vividly remember building up all of those prints for the Northstar while I was at Prestonwood. And the GM picking up the prints in his pickup. I think his name was John Colvin (or was it Clemons?) I learned my projectionist skills from our head projectionist Jim Bowman. Who later transferred over to Northstar as Assistant Manager/projectionist. I went over to Northstar and her gave me a tour. One early employee of Northstar I worked with was DJ Sneed. Who came back part time as a projectionist when John Devine was there. She stayed on part time until the end.

My tag name is KrisJay, aka Kris Sneed. DJ Sneed’s son. My mother started work at UA Northstar 8 in 1986 under the management of John Clemmons until 1988 when the GM changed to Mike Graham(they didn’t see eye to eye). She then worked at a couple of UA theatres for some years. She returned to UA Northstar 8 in 1998 under the management of Paula Jackson and Robert Murphy as a simple employee. She stayed until 2006 when the theatre closed its doors. Her final position was that of a projectionist. I remember Robert Murphy and Bill Skinner, the other people mentioned not so much. My mother at the time was working very hard to provide for both of us. She couldn’t afford a babysitter, so management allowed her to bring me to work. I practically grew up in that place. I was the bratty kid that ran up and down the stairs, watching free movies, and sneaking snacks from concession(sshh). I was heartbroken when the theatre closed. That place really was my childhood. I will always miss it.