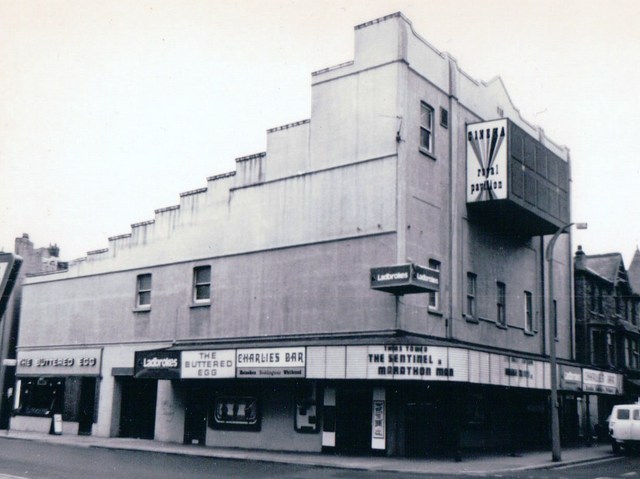 Originally the Rigby Road Garage, it became the Kings Hall and according to records was in a dilapidated state. In 1909 it was converted into cinema use as the Kings Hall Cinema with all seating on the ground floor. By 23rd June 1909 it had been re-named Royal Pavilion Theatre, when it was screening ‘animated pictures’. It was operated by Mr. W. Morris. It was closed during World War I, and was re-opened at Easter 1919. Alterations were carried out in May 1925, possibly to add a balcony to contain more seats.

By the late-1960’s, it had reverted back to its original Royal Pavilion Theatre name. Live shows were produced in the summer season, with cinema use in winter months.

Taken over by the Classic Cinemas chain in the late-1970’s, it was programmed with repertory films. This closed in 1983, and the building remained closed in 1984.

It re-opened as a live theatre, with productions of ‘girly’ shows & ‘drag’ shows. Returning briefly to cinema use in 1990, in 1993, it reverted back to live theatre use. In recent years it has become Scots Karaoke Bar. In 2020 it became a Beatles museum named Yellow Submarine.

Still to be seen on the side of the building is an ancient painted sign ‘Royal Pavilion We Excel All Others’, and the projection box protrudes out of the façade.

At some point the auditorium was horizontally sub-divided with the theatre / cinema operating from the former balcony and the stage above the front stalls area as this picture shows:– AUDITORIUM I believe at this point that films were still possible using the old (the one sticking out of the façade) projection room.

The rear stalls became, I think a bar and the front stalls a cafe.

The cinema/theatre entrance at this point was around the corner in Tyldesley Road through a former balcony exit stairwell, with the bar accessed from Rigby Road. A photo from circa 1992 here:– EXTERIOR AS A CINEMA

I used to go here in the early 80s for Saturday afternoon horror double bills.

aaaaaaahhh found it,at last, this was my home for 16 weeks as relief projectionist 1979.nice little cinema, very happy days and nice staff, made me feel welcome, with the b&b opposite it was one of the best holidays ever,still got the prezzie they bought me. happy days

Despite what is said in the current CTA Bulletin, the Royal Pavilion was not purpose-built. It was a conversion of a garage. Blackpool’s first purpose-built cinema was the Waterloo in 1912.

The Royal Pavilion was a conversion of the Kings Hall Garage, and was intially called the Kings Hall.
See The Lancashire Evening Post for 8 March 1909.

I’ll make a post on my Flickr page (in the next few days) showing the news clippings, which prove there wasn’t enough time to build a purpose-built cinema. I didn’t say the building was originally the Kings Hall. It was the Kings Hall Garage. (I’ve no idea where the name Kings Hall came from.) It initially opened in 1909 (for a very short while) as the Kings Hall cinema. I don’t like posting to Cinematreasures, because the descriptions end up being too confusing, with different people making contributions, but only one person claiming credit. Here’s a link to my Flickr page: https://www.flickr.com/photos/44435674@N00/ Regards from Philip.