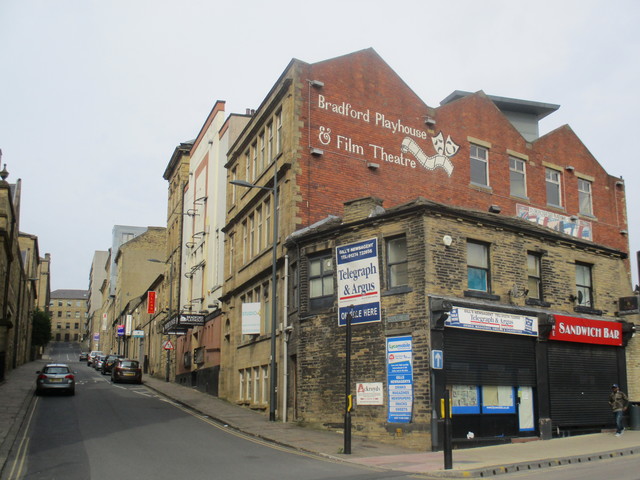 Located in the Little Germany district of Bradford city centre. The Temperence Hall was built in 1837. It was screening films in 1900. Film use was intermittent until 1909 when it became a full-time cinema. It was forced to close in early-1910 as it did not meet the licensing requirements of the new Cinematograph Act. Alterations were made and it reopened on 8th February 1910 showing Vivaphone Talking Pictures. By January 1911 it was operated by Hibbert’s Pictures Ltd. and they were still the operators in 1914. The Temperence Hall was still open in 1920 when it was operated by Bradford Picture Theatres Ltd. It closed as a cinema in 1922 and became a meeting hall named Jowett Hall. The hall was badly damaged by fire on 25th March 1935.

After a period of rebuilding it became the Civic Playhouse and Film Theatre and was opened with the world premiere of J. B Priestley’s “Bees on the Boat Deck” on stage on 29th January 1937 with the first film “Whom The Gods Love” being screened 8th February 1937. The two art forms continued together for many years since.

The stark 1930’s exterior, somewhat reminiscent of London’s Whitehall Theatre, was designed by architect Eric Morley and behind it lies a small Art Deco style foyer. The two tier auditorium is rather plain, the balcony has 8 rows and is flat fronted but with projecting loges at either side. The rectangular proscenium has quarter columns without caps or bases and is 7 metres wide.

Following another major fire in 1996 the building was restored, with improved facilities, and reopened in 1997 as the Priestley Centre for the Arts. It had 291 seats in the main auditorium and a small 70-seat studio theatre located on the first floor of an adjacent building. However, since its reopening, the theatre has suffered a sequence of financial crisis, and closed or nearly closed several times……

In October 2001, it launched an appeal, with the help of the Bradford Telegraph and Argus nespapaer, to raise £10,000 in order to avoid voluntary liquidation. The appeal raised over £11,000, and gave the theatre breathing space for three months, but by January 2002 it was again reported as facing liquidation. The theatre neverless continued to operate throughout 2002, but it was announced it would close on 20th January 2003.

A new board, led by Thomas Sanford, managed to secure a £40,000 bank loan, and this, together with £18,000 in donations, allowed it to stay open. It was relaunched under a new name The Priestley, with the management of the building now separate from the various group that used the building. The Priestley faced another financial crisis in Autumn 2008, and went into administration. It was relaunched, with a new board led by Jenny Wilson, reverting back to its former name the Bradford Playhouse. A grant of £51,000 from the Arts Council of Great Britain in July 2009 brought it out of administration - but only until September 2011, when once again it went into liquidation, with debts of £300,000.

The former chairman of the Playhouse, Rob Walters, himself a creditor, agreed with the liquidators Clough & Co. that his company, Be Wonderful Ltd. would run the theatre under licence from the liquidators. The theatre re-opened as the Little Germany Theatre, and the company announced that the studio theatre would re-open in January 2012 as the Isherwood Studio, in honour of former member Millicent Isherwood. Just a year later, Be Wonderful Ltd. had to close the theatre - but Clare & Jono Gadsby formed a new company, Takeover Events & Theatre Ltd. to lease the building for six months. It was now re-named the New Bradford Playhouse.

Although the liquidators had been looking for a purchaser for the building, with no guarantee that it would continue to be a theatre, in June 2014 they announced that it was to go for auction on 10th July 2014. Megan Murray, of the Friends of Bradford Playhouse, launched an appeal for funds and lobbied Bradford Council to declare it an ‘Asset of Community Value’, which would have delayed the liquidators' ability to sell it.

Thankfully in July 2014, the sale went ahead, local theatre enthusiast Colin Fine bought the building, with the intention that it continued to be developed as a theatre. Takeover Events & Theatre Ltd. continued to manage and run the theatre until July 2016, when they stepped back to concentrate on production. Megan & Carl Murray, who had been involved in managing the theatre, took over its running as Purple Stage Theatres on 1st August 2016. It is now known as the Bradford Playhouse.

Some aspects of the missing history in the above are covered in this website: https://bradfordtimeline.hornseaoldandnew.co.uk/civic.htm

For a picture of the stage when the Jowett Hall, check out RIBApix numbered RIBA60687, and for the facade RIBA60688.