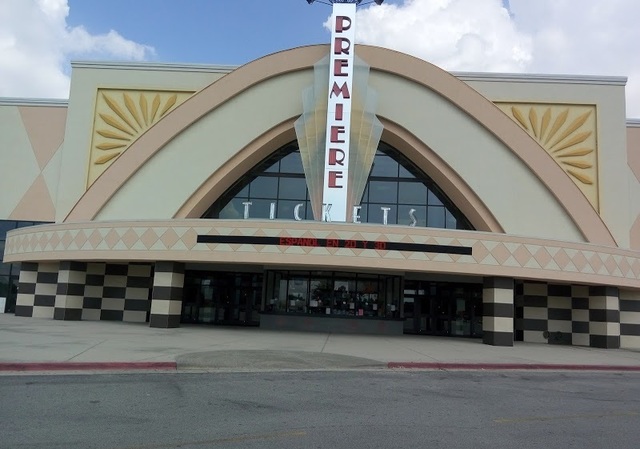 Located at Greenspoint Mall, this replaced the General Cinema fiveplex that was inside the mall. The Premiere Renaissance 15 was opened in 2010.

It sits outside where the J.C. Penny was located.

It’s an all digital venue with 3D, D-Box and soon, an IMAX screen.

I goofed. It’s The Premiere Renaissance 20 at Greenspoint Mall since the mall,itself,is still open.

The original indoor five screen theatre opened when the mall did in 1976 and began my love of all things General Cinema,having lived there from May 1977 to March 1979. It closed about a year before AMC acquired GCC.

This theatre no longer has DBOX. This theatre is a 15 plex, not a 20 plex. It originally was planned as a 20 plex but then scaled back to 15-plex plus IMAX. The IMAX is on hold due to issues with the mall. The IMAX was planned where the original GCC 5 screens are.

This theatre is designed without a mezzanine or projection booth. Projectors are mounted to the rear wall in an enclosure in the rear of the auditorium. All cabling is run back to the center of the theatre in the so-called “Digital Command Center”. Pictures here: http://www.pccmovies.com/theater.php?rtsID=48632

I was wondering about the name change. Thanks for the info.

Does anybody know about the screen count change? When I was there in 2011 it at least had interior signage indicating there were 18-screens. Wha happen?

The original screen count was going to be 20 – PCC had started renovating the original 5 GCC screens and built 15 new ones.

Then the idea was to do an 18 plex, 17 screens plus one Imax screen. The partial renovation on the 5 GCC screens stopped and the plan became to take 3 of the old GCC screens and making one big IMAX screen out of them.

Then it was discovered there was an issue with the roof of the mall. It was in terrible shape over the old 5 plex area (it sat empty and decaying for a long, long time) and the mall was having issues with their insurance company to pay for the repairs.

PCC signed a deal with IMAX for 4 IMAX screens. When it became apparent that there were going to be long standing delays at Greenspoint over the roof issue, PCC renegotiated the IMAX agreement from Greenspoint 15 to the Temple, TX location.

So, why the signage issue? Unfortunately the real answer is no one bothered to change the signage once the screen count changed. It’s a lack of attention to detail issue that has never been corrected. Greenspoint opened with 15 screens, and business dictates that it will likely remain 15 screens. I actually point this out every time I make a visit to this location, but no one ever corrects it.

Fun fact – http://www.cinematour.com/picview.php?db=us&id=77520 the kid at the center of this mural is the company owners son. he is in every mural the company does.

This is great! It’s details like this that I love. Similarly, the Krikorian (now Cinepolis) Pico Rivera 15 was originally supposed to have a giant screen concept added to it in the big empty field to the side of the building, but it never happened. So the theatre is built with theatres 2-15, and no theatre #1.

We could use a fresh entry for the Greens Crossing Theater that was at 1104 Greens Parkway Houston, TX 77067. There was a General Cinema Aldine at 5198 Aldine Mail Route Houston, TX 77039 also without an entry yet.