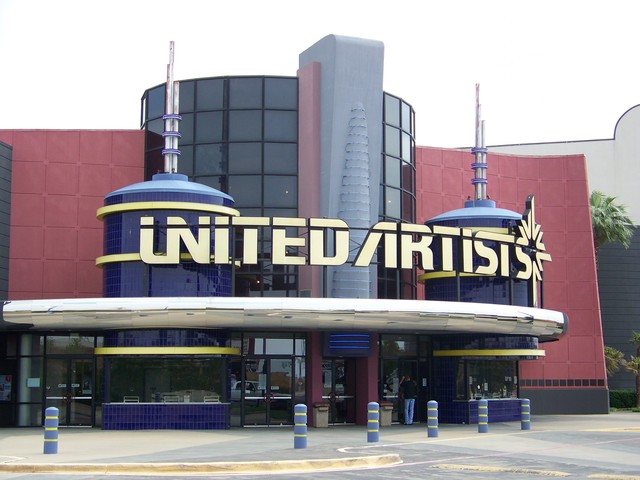 Opened on May 20, 1996 as a nine-screen multiplex in the 1990’s, six of them were THX-certified. Another auditorium in the theater opened in the early-2000’s. During it’s heyday, it was known as the “best kept secret in Dallas”, with wet gate projection, Showscan 70mm, and two 80-foot screens, the largest in Texas at the time. It was closed on March 16, 2020 due to the Covid-19 pandemic.

United Artists Circuits purchased 9.5 acres near the southeast corner of Jupiter Road and LBJ Freeway in northeast Dallas to launch a destination theater that eventually opened May 21, 1996 called the Galaxy. While much of the attention was going to 24 and 30 screen megaplexes of the era, UA was more conservative building 9-11 screen complexes. UA built its Lakepointe 10 theater in Lewisville opening in December 1994 and would build a similar facility in Grand Prarie (Aug.1995) along with two Fort Worth complexes opening in 1997 with the Eastchase 9 and the Fossil Creek 11.

Much like the UA Grand Prairie, the circuit was going after a contemporary Cinemark multiplex in the Hollywood USA 14/15. With screen count already in favor of the established Cinemark property, UA spent more on this property than the afforementioned theaters. The costs of the Galaxy sailed past $12 million with two huge 750 seat auditoria with 76.5 foot wide screens and 50-foot high ceilings affectionately called the 80 foot screens, eclipsing the 75 foot screens at the CInemark 17. The two auditoria had the second largest screens next to only the outdoor Astro Drive-In.

The theater made a statement, THX certification was found in six auditoria where digital sound was vibrant. There was stadium seating with rocking-chair padded seats in all houses, something that UA had eschewed in the past. A crazy large dual-sided concession area, gaming area, two additional concession stands close to theaters 5 & 9 – the largest houses, and a 38-seat Showscan ride simulator theater that rounded out the technologically innovative theater.

Opening night was wild on May 21, 1996. With eight theaters ready for usage, Mission: Impossible was screened on each screen a day before its actual opening and the theater attracted sell out audiences. People showed up, they filled the auditorium and went on to the next auditorium. The theater made $22,500 in ticket revenue selling out all shows until 11:45p.

Because of the size of the large screens, Star Wars fans camped out at the Galaxy as members of “Countdown Dallas” waited the highly anticipated 1999 film. The theater had many sell-outs and delivered the goods. The Galaxy 9 would become the Galaxy 10 when the Showscan novelty house was converted into a small screen. UA all but vanquished its Cinemark competitor as the Hollywood USA was downgraded to sub-run dollar house status. UA had all the new clearances it wanted for new films.

But United Artists, itself, fell on hard times and the circuit dropped theater after theater in the area and around the country. Even the Countdown Dallas group abandoned the theater for 2002’s Phantom Menace sequel opting for the DLP-centric Cinemark Legacy. UA which once had theaters all over Dallas would be taken over by Regal and would have only the Galaxy after leaving the Plaza, the Keystone, the MacArthur Marketplace, and all of its multiplexes including the North Star in Garland. Regal didn’t do justice to the Galaxy as THX designation went away. The cash-strapped Regal chain didn’t do much over the next ten years to refresh the property and weekday audiences found the 900 slot parking lot with more new cars for the adjoining car dealership than patrons.

Meanwhile, AMC would upgrade its 30-screen Mesquite property with a IMAX-branded screen, a bar, fork-and-screen full-kitchen houses, and recliners. More people were drifting away from the Galaxy. But there was hope as in 2015, the theater would receive its first major refresh when recliner seating was announced in March of 2015 to come in time for the big summer films. Because Regal owned the theater instead of the former practice of leasing, it realized that the theater might have an opportunity to remain vibrant heading into the 2020s.

Went here for the first time today. 90’s era relic that could use a 21st century lobby refresh. But the screens were big – although that 80 foot designation is a bit too much – and the sound system was really nice.

May 20th, 1996 grand opening ad posted. It had a Showscan theatre according to that ad.

The theatre closed again on September 6, 2021 purportedly for renovations.

Are they installing recliners?

If they’re actually renovating I’d be interested in seeing this with the new Cineworld orange and black disco theme… would be interesting. I always liked the exterior of this theater, one of the last unique UA builds I can recall.

Recliners were installed in 2015. It’s a mouthful, but the theatre was soon saddled with the moniker of the Regal United Artists Galaxy Stadium Theatre & ScreenX. It closed with the rest of the chain on March 16, 2020 for the COVID-19 pandemic. The Regal… with ScreenX reopened in September of 2020 but closed October 4, 2020 with employees wondering if the venue would even reopen. Those with Regal gift cards, loyalty points or loyalty programs had three more days to cash them in at the last open Regal/UA/Cineworld DFW theatre in the Regal Fossil Creek which then closed with remainder of the circuit globally on October 8, 2020 for the pandemic.

But both the Fossil Creek and …with ScreenX surprised all by reopening on June 25, 2021 to present Fast and Furious 9. Recliners were installed in 2015. The theatre closed again on September 6, 2021 for what the Regal website called renovations. They appear to have temporarily shut down because a road closure on the frontage road made it virtually impossible to get to the theatre. The renovations appear to have been extremely limited with the major difference at reopening on October 8, 2021 is that the expanded menu / kitchen items have been removed as of the reopening.

They must have problems recruiting kitchen staff.

Does anyone know who the current GM is there? The last I heard was it was Waymon Lister. He had been First Assistant for Bill Skinner (my GM at UA Northstar 8) back in 97 to 98.