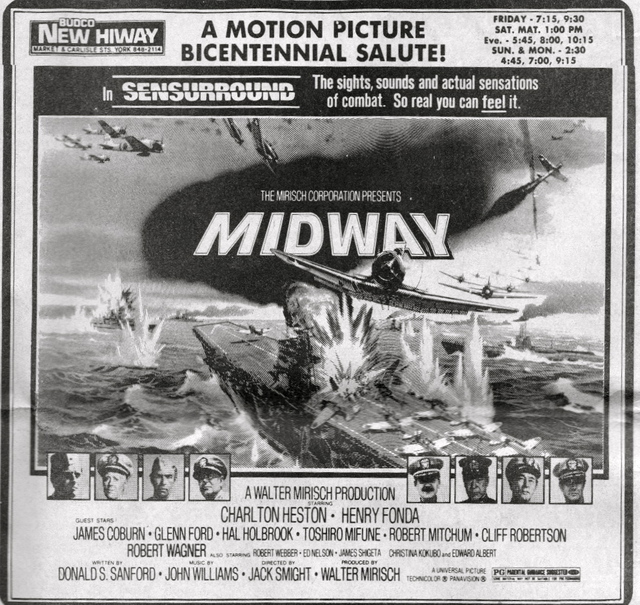 The Hiway Theatre was opened December 25, 1937 with Eddie Cantor in “Ali Baba Goes to Town”. Although within the city limits it wasn’t located downtown, but rather in the city’s west end in one of the most populous neighborhoods on West Market Street at Carlisle Avenue. The Hiway Theatre was a first-run theatre throughout most of its existence and was owned primarily by two companies: By 1950 William Goldman Theaters Inc. of Philadelphia and later by Budco Quality Theatres. In the 1960’s, 1970’s and 1980’s it was co-owned with the Stonybrook Drive-In and Lincoln Drive-In and the newer York Cinema.

The Hiway Theatre’s nicely-lit marquee featured a spectacular vertical name sign, visible in a 1945 photo. The vertical was gone by the 1970’s, perhaps removed after the Budco acquisition, when the theatre was somewhat updated and renamed the New Hiway Theatre.

Patrons bought their tickets at the box office, then entered through a small outer lobby with a concession stand. Through another set of doors was a carpeted inner lobby and the lounge areas. The auditorium was on one floor with 989 grayish seats. Along with walls were modernistic lighting fixtures, the type that might have been popular in the 1950’s. The Hiway Theatre had an unusual design in that the ceiling was curved, like a cavern, and was painted a deep blue. The draperies covering the large screen were gold.

For a theatre dating to a time before CinemaScope, the Hiway Theatre featured a fairly large screen and stereophonic sound. However it was not equipped for 70mm projection. Yorkers fondly remember attending the Hiway Theatre to enjoy “The Sound of Music,” which played a reserved-seat engagement after its roadshow release and drew large crowds even though it was shown in 35mm.

The Hiway’s marquee remained unlit until Budco reopened it for one last summer in 1981. The format was second-run movies including “Superman II,” “The Four Seasons” and “The Howling.” Budco did little in the way of maintenance. Many of the marquee lights were burned out and little effort was made to make the theatre inviting. The last mainstream picture to unreel at the Hiway Theater was “Under the Rainbow,” a lame comedy that star Chevy Chase called “one of the worst movies ever made!”

It sat vacant for another couple of years before being sold by the city for back taxes. The property was purchased by Olde Country Reproductions, manufacturers of decorative metal ware, which operated a factory and an outlet store next door. The marquee was removed and the lobby area demolished, leaving only the auditorium standing, which was converted to factory use. Only the triangular shape of the building shows any indication of the former Hiway Theatre.

Thanks John! For several years I wanted to know more about this theater.I have several ads for the Hiway from the late thirties till 1970. Great photo. I have photos of the York Cinema but I see it hasn’t been added yet.

Excellant write up John. I always love reading your posts.

Bet this was a beautiful theater when it open. You have to love the signage.

Marcel, do you still have the photos of the York Cinema?