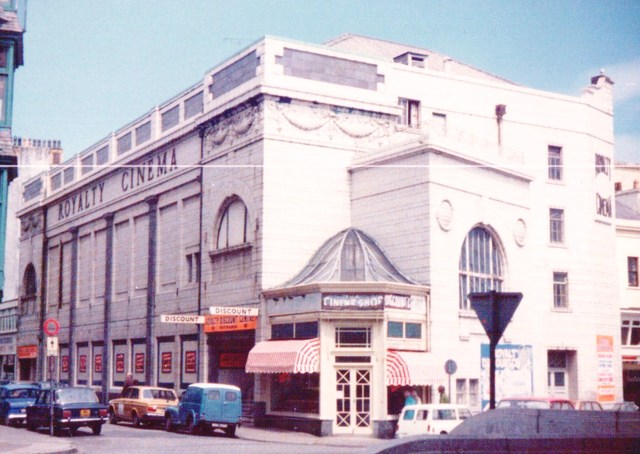 Built on the site of the 2,000-seat Pier Pavilion (1905-1926). The Royalty Cinema was opened on 6th June 1927. The facade was in a glazed terra-cotta ware in white, with granite columns. Inside the auditorium seating was provided in stalls and circle levels. The side-walls had a collonade with arches, and there was a blue ‘sky’ ceiling, giving an Atmospheric style to the interior. The stage was 10 feet deep.

It was built for and operated by the Palace and Derby Castle Company, and they made the Royalty Cinema their head office.

Live shows were stage during the summer season for many years with films during winter months, and during the 1950’s and into the 1960’s it was primarily a live theatre. From the mid-1960’s it was only open in the summer season, and for a brief time, the rear stall seating was removed and a slot racing setup was installed. Films continued until September 1970, when the Royalty Cinema was closed.

It was converted into a furnishings store for Messrs. Chipperton. The building was demolished in 1995 and a block of offices was built on the site.