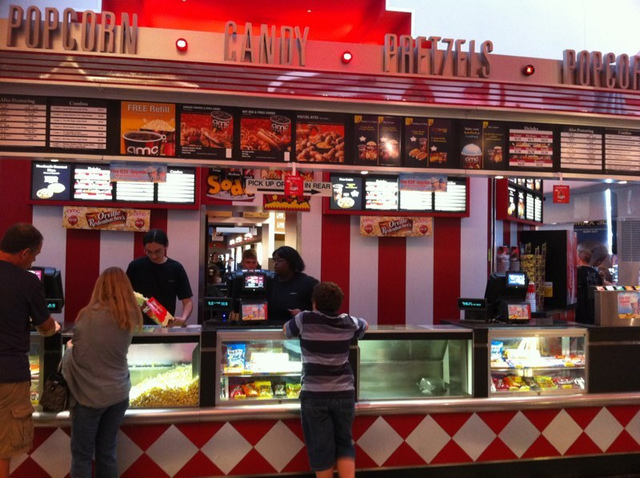 Loews Cineplex opened the White Marsh 16 on December 25, 1997. Seating capacities range from 480 down to 80. The theatre was 100% THX certified offering a Lucusfilm sound system as well as Sony’s Digital Dynamic Sound in each auditorium.

I know about this place because I pass by it on my many trips to New York.

This venue had an original posting years ago, with comments since. I know because I had several postings on it!

Theatre 5 is the retrofitted IMAX theatre. Although the auditorium is large, the IMAX screen is not wall to wall due to emergency exits behind the screen – there are exit pathways on the left and right sides of the screen. Pixel grid is very evident due to the 2K resolution of the IMAX digital projectors and the longer throw distance of the projectors. IMAX sound is uncomfortably loud.

According to the cinema’s respective websites (amctheatres.com + MovieTickets.com + Fandango), Dolby Cinema is opening in the other largest auditorium (#4) this weekend. I wonder if they went with a wide scope ratio screen or a flat ratio screen for Dolby Cinema. Seating was cut from over 400 rocker seats to around 160 reserved power recliner seats with transducers for Dolby Cinema.

The retrofitted IMAX screen directly across the hall in #5 is ceiling to floor but not wall to wall due to emergency exits (as mentioned in the last post). The width of the IMAX screen does cover the width of the seating area, so most won’t notice anyway.

This opened on December 25, 1997. Grand opening ad in the photo section.

When the cinema still had film projectors, auditoriums had Dolby Digital installed (probably after opening), as they had the respective signs outside each auditorium entrance, even after the THX signs were removed. All of these signs were removed during the recent remodel (if they had not been already removed beforehand).

The Dolby Cinema reissue of Titanic (color graded in Dolby Vision HDR) was presented in Dolby 3D at this location.

I believe auditorium 6 has a 70 mm projector (along with the digital cinema projector), which was used to screen “The Hateful Eight” and “Dunkirk” in 70 mm film.