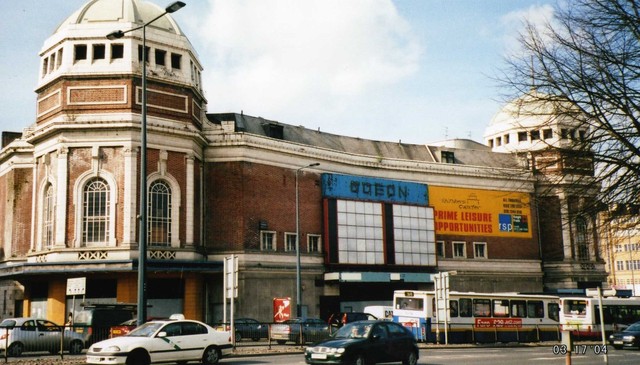 The New Victoria Cinema opened on 22nd September 1930 with Tom Walls in “Rookery Nook” on the screen, plus on the stage “Follies of 1930” which was specially produced for the New Victoria Cinema, ‘this sparkling novelty presentation included speciality dancers, catchy songs and dazzling dresses’. It was built for and operated by Provincial Cinematograph Theatres(PCT) and Gaumont British Theatres chain. An enormous and very elaborate cine-variety house, the New Victoria Cinema had a stage 70 feet wide and 45 feet deep, ten dressing rooms. It was equipped with a Wurlitzer 3Manual/10Ranks theatre organ, which was opened by organist Leslie James. There was also a café, a 200-seat restaurant, and above the restaurant was a large ballroom.

The style was done in Italian Renaissance and the total seating capacity of 3,317 was split between 2,065 seats in the stalls, 509 in the mezzanine circle and 732 seats in the balcony, the latter two were entirely different levels but the balcony did not overhang the circle. There were two boxes on each side of the mezzanine circle containing 5 movable seats in each box. An enormous dome dominated the ceiling with a frieze running around three sides of the auditorium just below the ceiling. The projection suite was located between the two upper tiers.

The architect of this ‘super cinema’ was William Illingworth, and when it opened it was one of the largest cinemas in the UK. It remained in the top 10 of the biggest cinemas until sub-division in 1968.

The stage was well used by companies such as the major touring Ice Spectaculars, the Royal Festival Ballet and pop stars from The Beatles to Buddy Holly.

It was renamed Gaumont in 1950 but closed for alterations 30 November 1968. The circles were amalgamated into one level and split front to back to form two new cinemas seating 467 in Odeon 1 and 1,207 in Odeon 2. The stalls became a separate 2,000 seat bingo hall. The stage remained intact but was never used again. The new complex re-opened 21 August 1969 and the name changed to Odeon after the closure of the original Odeon (closed and demolished immediately after closure).

Later in 1987 the former ballroom was converted into the 244 seat Odeon 3. The magnificent original decoration was no longer visible in the auditorium areas and the resulting cinemas were comfortable but extremely bland.

A new entrance was formed for the cinema in the centre of the façade whilst the bingo hall retained the original grand entrance in one of the two domed towers.

The bingo operation was the first to close and the ground floor was boarded up. In 2000, a new 13-screen Odeon multiplex was constructed out of the town centre on the edge of Bradford and Pudsey, and the 3-screen Odeon closed on 2nd July 2000. The building is now deteriorating rapidly. Even if it were to reopen as a live concert or performance venue (unlikely) the sumptuous interior is irreplaceable.

Had it survived intact for just a few years more it would undoubtedly been listed and gained some redevelopment protection. The building has been under threat of demolition and redevelopment for several years, but many local citizens have opposed this and are trying to save the building.

In October 2012, the property development owners of the building offered to sell it to Bradford Council for £1.00 (one Pound). The Council accepted this generous offer. In March 2015 work began on restoring and renovating the building to become a performing arts centre.

Message to scoombs… was your father Harry Hines?

Ive just seen a programme with Michael Portillo about the Odeon.Apart from the Ballroom,the auditorium looks as if theres nothing left to conserve.

The building is now being restored as a live music venue at a cost of £22 million.

The article includes renderings of the proposals, proposed ground floor plan, and photos inside the cinema building (partially stripped to the state required for the redevelopment.)

The planning application for the venue (approved):

Main planning application for the “Refurbishment and extension of former cinema to create an entertainment and event venue with supporting ancillary spaces including bars, ballroom and cabaret bar/restaurant and three-storey extension.”

A previous “CONSERVATION STATEMENT” (for a Lottery Funding application) notably informed by the Theatre’s Trust, 20th Century Society, Cinema Theatre Association, Cinema Theatre Organ Society, as well as the local authority and organisations has been used as a source for the document marked as “HERITAGE STATEMENT,” which in turn seems to have been largely incorporated into the document marked “DESIGN.”

The latter is therefore the most convenient “all-in-one” file to download; it includes extensive background information, alongside numerous photos of the cinema, including under construction, the original plans, the 1960’s conversion plans, and, of course, also covers the proposed scheme.

Telegraph and Argus — May 2019 — “Inside Bradford’s Odeon as work continues ahead of Bradford Live music venue conversion”.

According to the article, further strip out works are underway, with the 1960s conversion floors/walls/added structural elements being removed.

At the time of publication, in particular:

The article also states that the licensing application has been approved.

the auditorium looks as if theres nothing left to conserve.

The only decorative aspect I know of that remained in the auditorium is the plasterwork at the front of the lower circle, in the void between the bingo hall ceiling and the 1960’s auditoria.

It (and the original steppings behind!) can be seen in a video uploaded with the title “Bradford Odeon Stripping Out ~ Autumn 2014”

“Although much of the plaster decoration of the auditorium was lost in 1968, the steel structure that supported that decoration survives, as do important fragments of the decoration itself, such as the roof lantern.”

Overlaying Rank’s 1960’s drawings over the original, one sidewall of each of the two auditoria being in approximately the same location as the original. It’s not quite clear, but it appears that the rear wall position is partially in the same location, and its central section may suggest that alterations made could not have allowed for the original decoration to have survived.

However, the “Engineering Heritage” section of the “Design and Access Statement” (PDF p14) suggests that the structural aspects are of interest:

“With main roof trusses nearly 3m deep, spanning over 40m across a vast auditorium nearly 20m high, and a rear corner cantilevered out over the Bradford Beck, the ambition and skill of the engineers involved is impressive even by modern standards.

The Michael Portillo programme to which madorganplayer referred was broadcast today on Channel 5.

(Portillo’s Hidden History of Britain—Season 2, Episode 4: “The Palace of Dreams.”)

It is currently available to stream on demand until the 30th November 2019.

Obviously, it is aimed at a “general interest” audience—however, I did watch part of it and from what I could tell the plasterwork to the edge of the auditorium’s dome was (at the time of shooting) still intact.

Restoration is coming along well given the corona virus pandemic ect ..they have now actualy manage to remove all of the tripling of the cinema and got it back to one big auditourium! …you can follow the progress on their you tube channel Bradford live!and also their titter feed and web site! here is the YT vid of restoring the auditorium in 2019! https://youtu.be/xJpOiUpbZQs