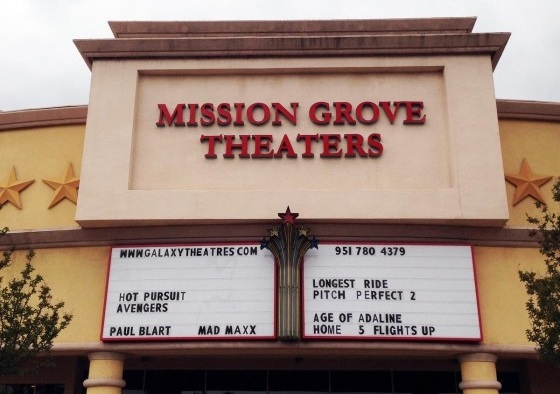 CinemaStar Luxury Theatres opened the Mission Grove 14 on March 22, 1996 with a week of free movies on a limited number of screens. Due to construction delays the other screens of the 2,400-seat theatre were due to open within another week with their regular schedule. The Riverside Press-Enterprise said screen legend Mickey Rooney and 500 invited guests attended the ribbon cutting ceremony on March 21. Rooney entertained the crowd with Hollywood stories before etching his name in wet cement at the entrance.

In April of 2000 four more screens were added to make it the Mission Grove 18. On March 6, 2007 the Press-Enterprise said the owner of Mission Grove Plaza had taken over the shopping center’s 18-screen theater complex from its longtime operator, Oceanside-based CinemaStar Luxury Theatres, Inc. The center was said to have hired a theater consultant to operate the theater.

In 2011 the theater was still operated by the center’s owner. By 2018 it had been taken over by Galaxy Theatres.