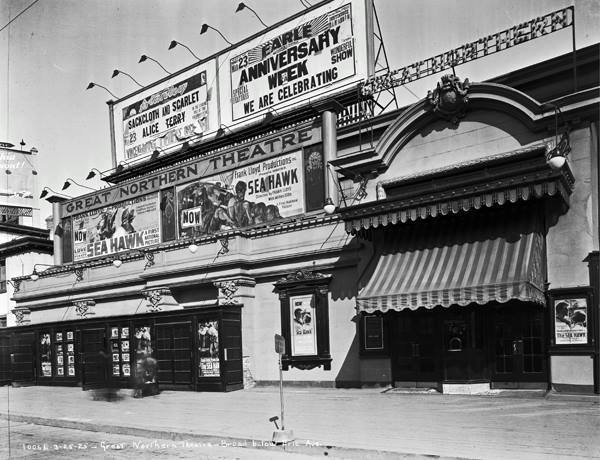 The Northwestern Theatre was one of Philadelphia’s early neighborhood houses. Located on Broad Street, just south of Erie Avenue. It opened as a nickelodeon and was expanded in 1912 and renamed Great Northern Theatre. It was equipped with a United States organ. In 1916 it was remodeled and expanded to plans by Philadelphia architects Henon & Boyle. An Austin 2 manual 20 ranks organ was installed (Opus 636.) replacing the United States instrument. In 1924 a Wurlitzer 2 manual 9 ranks organ was installed. In 1928 it was equipped with a Marr & Colton organ.

Vintage photos show that the Great Northern Theatre was still in operation in the late-1930’s. It’s possible that at some later time the entrance was moved to Germantown Avenue, as the building extended through the block. The seating capacity was given as 1,050 in the early-1940’s.

The Great Northern Theatre was closed on November 2, 1952 with Rita Hayworth in “Affair in Trinidad”. It was demolished in December 1952/January 1953.

Philly History provides this 1925 photo of the Great Northern Theatre.

Another page at Philly History has a paragraph about the Great Northern, saying that it had entrances on both Broad Street and Germantown Avenue, that it was expanded from a nickelodeon on the site in 1912, and that the building was converted into a drug store in 1953. The paragraph does not mention the 1916 expansion designed by Henon & Boyle, which was noted in issues of The Moving Picture World and at least one other trade journal that year.

This Facebook page about businesses on Germantown Avenue lists the Strand, Temple, and Great Northern as the theaters on Germantown between Tioga Street and Erie Avenue. The Strand is listed at Cinema Treasures, but I don’t see a page for the Temple. I’ve been unable to find any other mentions of that house.

Another glimpse of the Broad Street entrance to the Great Northern Theatre can be seen at far left in this ca.1940 photo of the intersection of Broad Street and Erie Avenue. Some of the original details of the facade had been removed by this time, but the entrance is still recognizable.

It’s impossible to tell from Google’s current street view whether the entrance building has been entirely replaced, or just drastically remodeled. The Germantown Avenue side of the building, which has the front entrances of the three retail stores that now occupy the site, looks almost entirely modern, but the theater’s auditorium building appears to still be standing.

The Pipe Organ Database of the Organ Historical Society has this page listing the 2-manual, 20-rank Austin organ that once served the Great Northern Theatre. The organ’s fate is currently unknown.

Street View has been set too far south. The Great Northern’s Broad Street entrance was immediately south of the “99 cent deal” sign that is just a short way south of Erie Avenue. There is a gap in Street View along the section of Broad Street just south of the theater’s location. It looks like something temporarily went wrong with the camera, and there’s nothing shown but an orange blur.

I grew up in Tioga in the ‘40s. The Great Northern was on Broad Street but could be accessed from Germantown Ave through The Arcade. The Arcade, consisting of several shops, opened on Germantown Ave.

The partner in Henon & Boyle who worked on the Great Northern Theatre had to be James F., the son of Rowland Boyle, who died in 1911. Here is James F. Boyle’s page at Philadelphia Architects and Buildings.

Here is an item from the June 1, 1916, issue of The Moving Picture World about the firm’s participation in a remodeling and expansion of the Great Northern:

“Philadelphia, Pa. — Henon & Doyle [sic], well known architects of Philadelphia, are receiving bids for alterations and an addition to the Great Northern theater, Broad street and Erie avenue. The contract will soon be let and the work of renovation will be rushed forward with all possible speed. This theater is one of the largest moving picture theaters in that section of the city and is patronized daily by thousands of persons.”