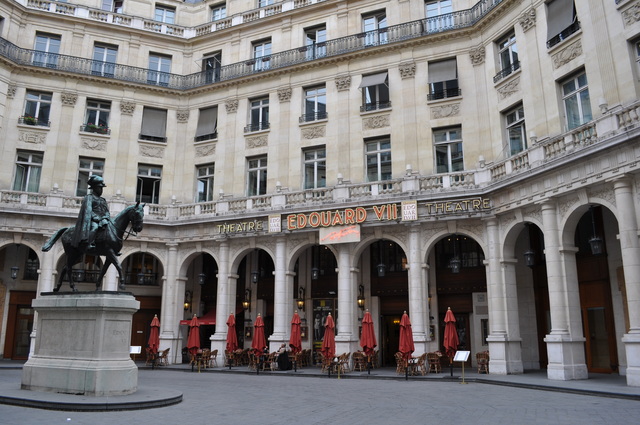 Located in a narrow cul-de-sac off the Boulevard des Capucines, not too far from the Paris Opera House. Named after the British monarch King Edward VII, the 718-seat Edouard VII Theatre was opened in January 1914 with a presentation of films by the cinema pioneer Joseph Urban, who invented the Kinemacolor process. The theatre was designed by noted British theatre architect W.G.R. Sprague who was based in London. Seating is provided in orchestra stalls, dress circle and balcony levels.

In 1916, it was converted into a live theatre. Over the years many famous stage stars have appeared here, including Sacha Guiltry, who appeared in many productions in the 1920’s.

In 1931, it reverted back to cinema use, screening films in their original language versions. It became a live theatre again in 1941, and has remained so ever since. It was renovated in 1995.

Today, the building also contains a 400 seat cinema, which like the main house is set in an Adam style auditorium.

The June 7, 1913, issue of Exhibitors' Times ran this one-page item about the Theatre Edouard VII, then under construction, with a rendering of the auditorium.