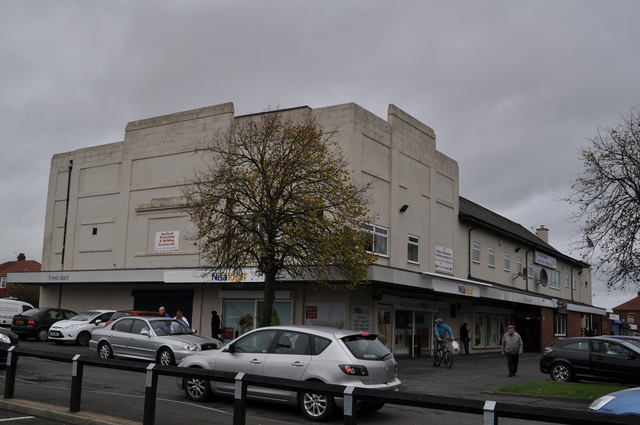 Located on the main Tynemouth Road at the corner of Marske Road, between Wallsend & North Shields, Tyne & Wear. The area where the cinema was located was originally known as Howdon-on-Tyne. The Lyric Cinema was part of the local chain Tyne Picture Houses Ltd., operated by James McHarg of Wallsend. It was opened on 4th August 1939 with Bud Flanagan & Chesney Allen in “Alf’s Button Afloat”, but was closed at the outbreak of World War II in September 1939. Within weeks, it reopened again. The entrance was on Marske Road, with the length of the auditorium running parallel with Tynemouth Road.

It was due to be closed on 12th March 1960 but unruly teenagers and a lack of staff to control them forced the manager to close the Lyric Cinema on 8th March 1960. It was converted into a Co-Op supermarket on the ground floor and the building was divided horizontally to accommodate the High Howdon Social Club in the former circle level. The projections rooms were converted into offices. Today it is in use as a Nisa Local supermarket on the ground floor, with the social club still operating upstairs.