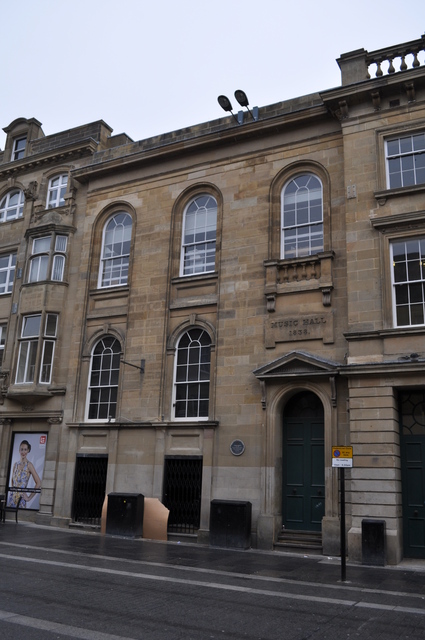 Located in Newcastle city centre. The Music Hall was opened in 1838, with the actual hall being upstairs on the first floor. In 1861, Charles Dickens gave a reading of his works in the hall, which at the time was known as the Lecture Room.

In 1879 it became the New Tyne Concert Hall. In 1884, it became the Gaiety Music Hall, which was closed in 1890 when the nearby Empire Theatre opened. It became a Temperence Hall, known as the Central Hall.

In January 1908, films were screened here. It was converted into a full time cinema, the Gaiety Picture Hall, which opened on 29th March 1911. Seating was provided in stalls and circle levels.

In 1930, it was the last cinema in Newcastle to have sound equipment installed. By this time it was part of the independent E.J. Hinge Circuit. The Gaiety Cinema was closed on 26th February 1949, when the city council declared the building unsafe. In 1951, it was briefly used by students as a cabaret venue during Rag Week.

The upper part of the building containing the cinema then lay empty and unused, while the ground floor was in use as a fruit warehouse for many years. The building was demolished in 1964, only the facade was retained, and this now forms part of the large Elbow Square Shopping Centre.