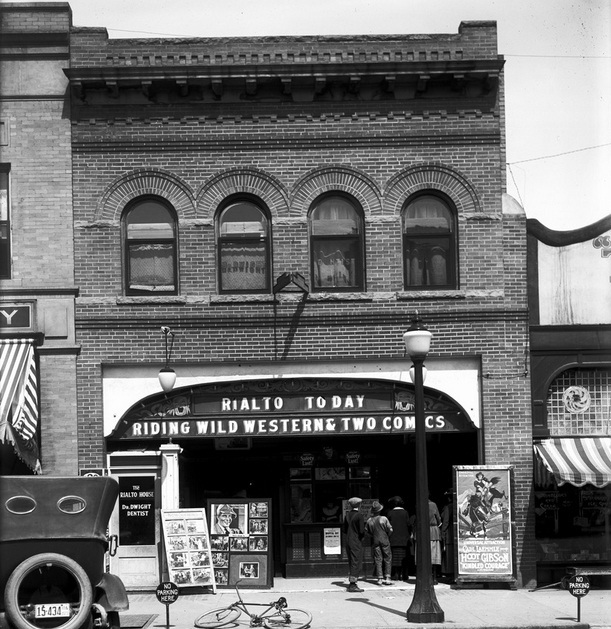 The old Orpheum Theatre made the Twin Falls News when it opened on June 5, 1908. It was described as being under the management of Prof. Bunn and opening in the old rink. On June 16, 1908 the News made a comment that it was still drawing large houses and that the pictures were very clear and distinct. This first Orpheum Theatre, was located next to the Gem Theatre whose equipment was used in the new Orpheum Theatre on Main street, which opened on October 31, 1921.

The first Orpheum Theatre in Twin Falls was operating by 1906 in a small, wood framed building on Main Street. This photo depicts the second Orpheum at 131 Shoshone Street. It also gives a glimpse of the Gem Theatre next door, advertising a Clara Kimball Young movie.

In this photo the second Orpheum has become the Rialto. A sliver of the Gem’s building, no longer a theater by this time, appears here as well.

Did he conflate the Grand with the second Orpheum in 1910, or was this house actually called the Grand for a while? If it was, it had to have gone back to Orpheum by 1918 as I’ve found references to the Orpheum dating from that year.

Nearby theatre histories . I added a page for the Dime Theatre on Main Avenue.