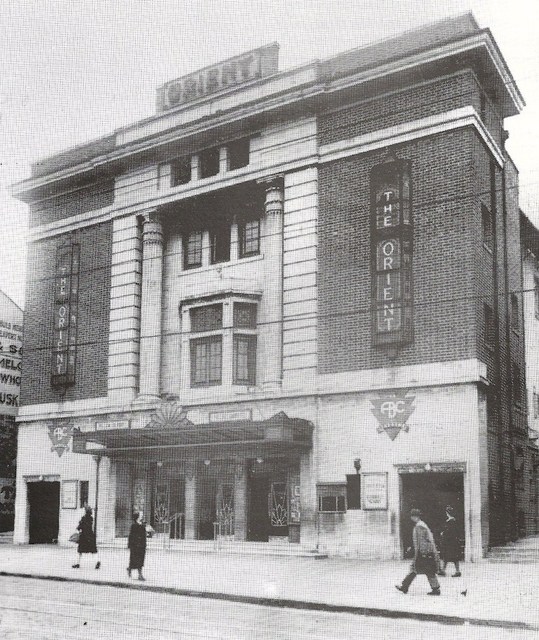 Located in the Birmingham inner city district of Aston at Six Ways, to the north-east of the city centre. The Orient Cinema was a project of Cinema Proprietors Ltd., a company set up by Leon Salberg & Sydney Clift (founders of the Clifton Cinemas circuit). The company was taken over by Associated British Cinemas(ABC) in 1929.

The Orient Cinema was opened by ABC on 4th August 1930 with Charles Murray in “The Cohens and The Kellys in Scotland”. The impressive Neo-Classical style facade was in brick with stone dressings, and had a glass illuminated light-box on each side, horizontally stating ‘The Orient’. Inside the auditorium, the decorative scheme was in an Atmospheric Chinese/Oriental style, with pagodas on each side of the proscenium over the front stalls exits. The side-walls had huge painted scenes of a Chinese landscape, these decorations were carried out by scenic artist George Legg. Seating was provided in stalls and circle levels.

Re-named ABC from 3rd February 1964, it was closed on 23rd August 1969 with Mike Henry in “Tarzan and the Jungle Boy” and Dennis Weaver in “Gentle Giant”. It was taken over by an independent operator who screened Asian (Bollywood) films until final closure in the late-1970’s. It was demolished, together with the immediate area, and a housing estate was built.

ABC did not take over Cinema proprietors as such. There was a strange merging arrangement ABC bought out two of the principles Dent and Cohen who went on to found their own circuits. It must be remembered ASSOCIATED BRITISH CINEMAS LTD meant what it said on the label.. ABC managed the hall along with the others in the CP company even the ABC New Street.